Day 1.
Jan 01, 2014. Our flight is on the 2nd but we decided to play it safe and overnight in Vancouver. Sydney picked us up at the ferry and we went for a wonderful Malaysian meal before checking into our airport hotel for the night. It made it so much less stressful than trying to do it all in one day.

Day 2. Our flight to Dallas left at 1:40PM, or it was supposed to anyhow. A mechanical had us delayed on the runway for over an hour and then upon arrival in Dallas they could not find a gate for us. There were a lot of folks connecting to other flights and therefore some very anxious passengers. We had originally two hours until our next flight and we had made up some time on the way so still had an hour. As we were leaving from the same terminal we were not too worried.

Our flight from Dallas to Santiago left on time at 9:30PM and the next 9 hours were incredibly long. We are seriously going to try to avoid overnight flights from now on.

Day 3. Arrival in Santiago was on time at 9:30AM. So were the other five international flights. It was crazy busy in the small airport. We had to line up for 40 minutes to pay our reciprocal fee of $135 US and then another hour or so in the immigration line, to be followed by fighting our way through the congestion to the baggage area. We were the last carousel and because we took so long to get there all the baggage was off. Unfortunately ours was not among the ones there. Our bags did not make the flight.

We then stood in another long line behind many other American Airlines passengers who did not get their bags either. When we finally got the the front she said they located one bag in Dallas but the other was still unlocated.......... Hopefully both will be on the flight tomorrow and we will have them tomorrow night.

We then had to stand in another very long line to go through agriculture, where you put your baggage through an xray machine [leaving the airport], to check for plants and food etc.

Finally, outside we catch a cab to our hotel.

Santiago is a very large city, 6 million people [almost half the population of Chile lives here]. Our apartment in the the centre of the old part of town and because it was only 1PM we had to wait an hour to check in. We both felt like zombies from lack of sleep but ventured out to find a cafe for some lunch. We managed to find an excellent little sidewalk cafe and had a wonderful quinoa salad and vegetable crepe. And the best Americano Coffee that we have every had, or it seemed that way anyhow.

At 2P we were back and checked into our very trendy, Bohemian style small apartment. It looks like something that would be in Yaletown. The downstairs has a small leather couch, basic kitchen and brick wall and a small balcony overlooking Santiago. We are on the 16th floor and have a great view of not only the city but the Andes which surround Santiago.

There is a floating staircase to the second floor where we find our bed and bathroom. There is another small balcony here. The only thing kind of strange is that the balcony door is glass and there are not any curtains on this window, just the ones in the living room. The sun rises at 6:30 so I guess we will be getting an early start which is okay.

We slept for a few hours and then went out to find dinner. We came upon a recommended area that has many cafes with out door seating and alive with wonderful street musicians and artisans selling from stalls. It is Friday night and the places are packed with young couples out on the town. It is a very young area but that means it is very lively as well.

Our food was wonderful in the chic artsy restaurant that we found. Dinner is usually not until 8PM or later here. On the walk home we stopped at a grocery store to get some breakfast food and fruit.

Day 4. Slept through the night until 9AM!!! What a treat. At 11 we wandered off to the main area, Plaza de Armas. A large church invited us inside and we sat and listened to taped music by a woman with a magnificent voice.

We spent the day wandering the old city. The two museums that we really wanted to see are both closed which is disappointing, but we went to a very small archeological museum which had some hats and decorative items that I had never seen before. A very small sidewalk cafe was attached and we both had fantastic salads and amazing iced tea.

The weather is 30C but there is not a lot of humidity. By the time we walked back to our apartment, around 4PM, the smog was thick. We could not see the mountains from our room, and could barely see the skyscrapers near by. Santiago has a big problem with smog because it is surrounded by the mountains. There was no wind today which made it worse.

We were so ecstatic to see both of our suitcases in our room upon our return. Mine had been opened, which I don't mind, it looks like everything is there, however they did not put my lock back on. But we are thrilled to have our bags, and summer clothes!

After a sleep we went back to the same area as last night for another great meal but at a different restaurant.

My Spanish is coming back. Not many people speak English which is great and I am hoping by the end of the three months I am pretty comfortable speaking and understanding.

We are in Santiago for a couple more nights and then will take a bus to the coast and rent a car to explore for a week. I will post around once a week again,. 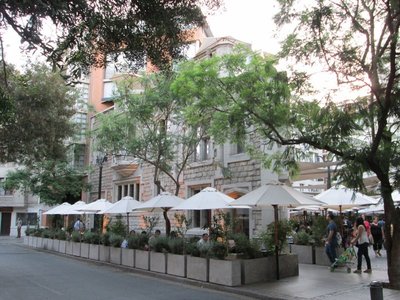 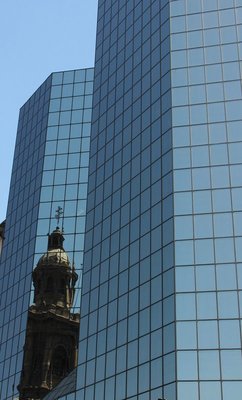 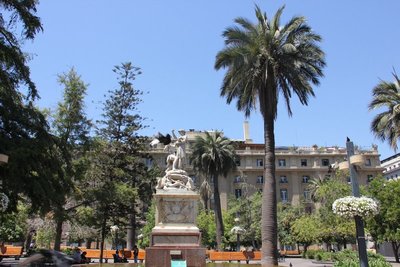 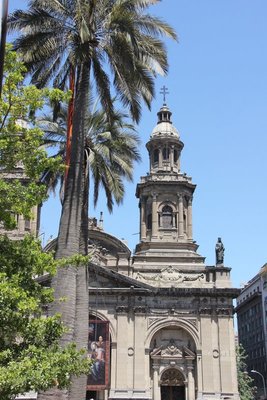 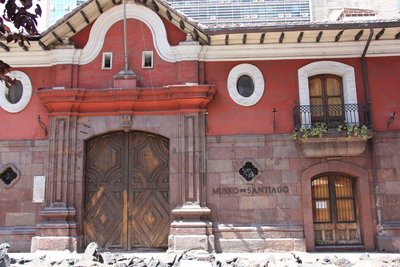 Posted by debbep 18:49 Archived in Chile

Previous Next Table of contents

Always interesting to hear about your adventures and seeing the pics...no different with this submission. Glad you didn't wait too long for your luggage. I had to go to Coombs this morning so I cruised by your place...all ok so far. Stay thirsty my friends!

Wow! Looks beautiful....its not 30 degrees and sunny here! Hope you guys have a blast.

This blog requires you to be a logged in member of Travellerspoint to place comments.

If you aren't a member of Travellerspoint yet, you can join for free.