Kauai and Maui re visited

My husband and I just spent three wonderful weeks in Hawaii and wanted to share our trip highlights.

Background. I was a sales rep for Aloha Airlines, and also for a short time Hawaiian Airlines out of Vancouver back in the early 80s for 15 years. I would go to the islands five or more times a year on business and holidays and my husband and I also spent our honeymoon on Maui and Kauai 37 years ago. At the end of my time with Aloha I created my dream job of taking travel agents to the islands to go on snorkel tours, helicopter rides and wine and dine them for a week. Unfortunately I got laid off 25 years ago and other than a short stop over on the way back from Tahiti we haven’t been back since. I could not afford to travel here in that style any more if we were paying for it.

. We chose to explore many other parts of the world instead.

Details: We flew WESTJET from Vancouver to Kauai on Feb. 19th and then returned Maui to Vancouver on March 11th. We flew with Hawaiian Air in the middle.

Car was booked with AVIS thorough Costco and I kept going back to check the prices as they kept falling so I would cancel and re book. By the time we left it was half of the original price. We chose a small economy car as there was only the two of us and it was great on gas, parking and negotiating the narrow roads.

The Islander on the beach on the coconut plantation was a great place to stay for our first week in Hawaii. At night we left the patio doors open and could hear the surf breaking on the beach through the patio doors. The sun came up in an explosion of color every morning at around 6:30AM and we shared in its majesty while enjoying a cup of Kona Coffee on the patio. 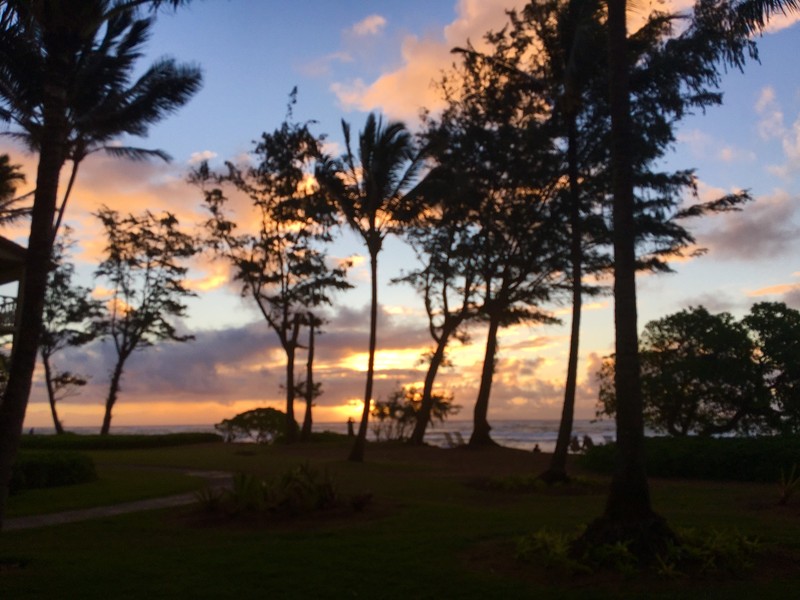 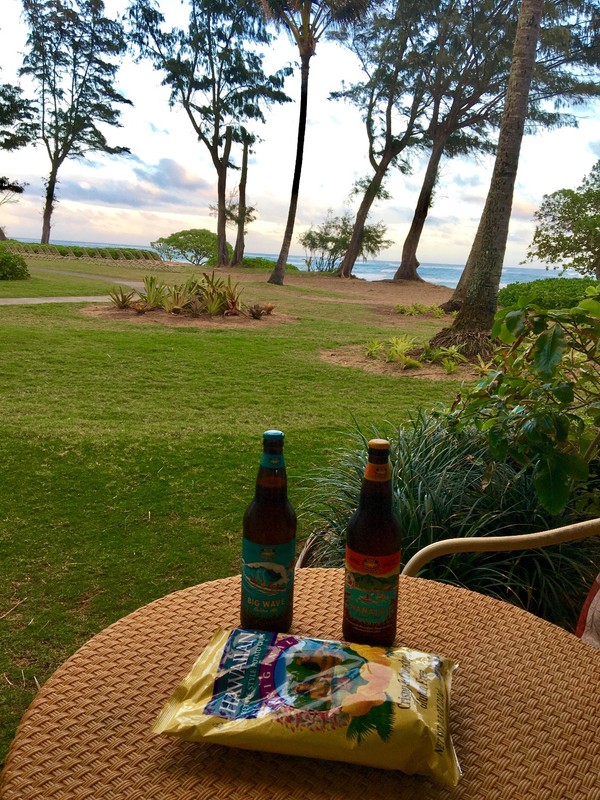 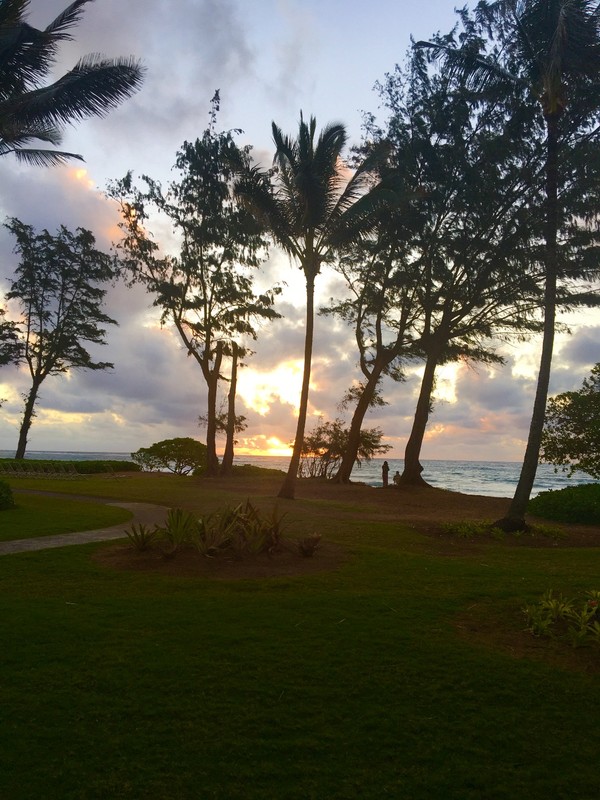 Our week was spent exploring various beaches and trails at all points on this northern most island. Each area had a different charm, the North, Hanelei and Princeville being very junglelike and green.
Poipu beach was great for a swim a couple of days, and the McBride Gardens were beautiful. We had a volunteer take us on a tour and explain the various plants to us as well as some of the history regarding the first peoples to the islands. 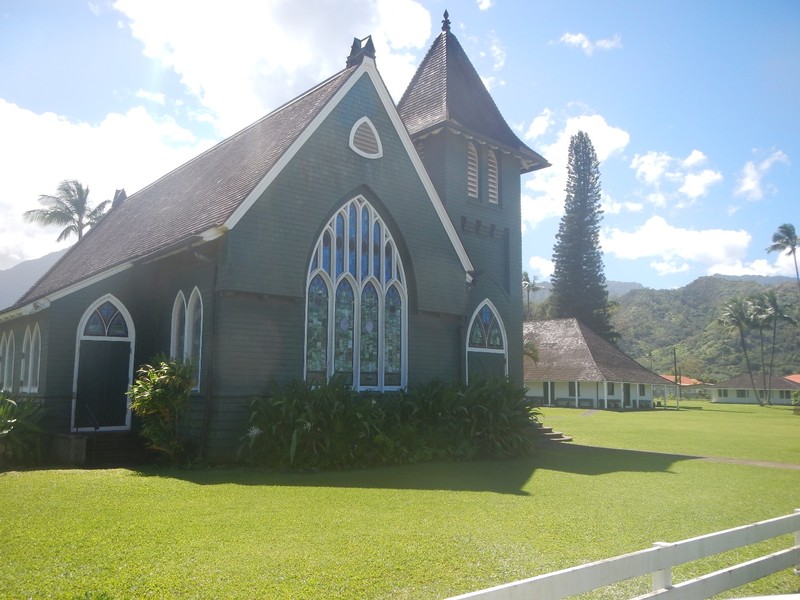 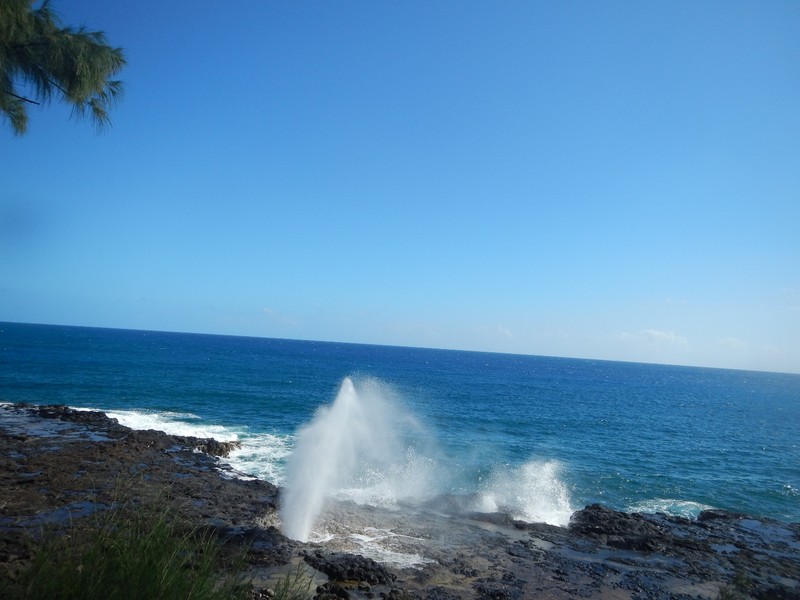 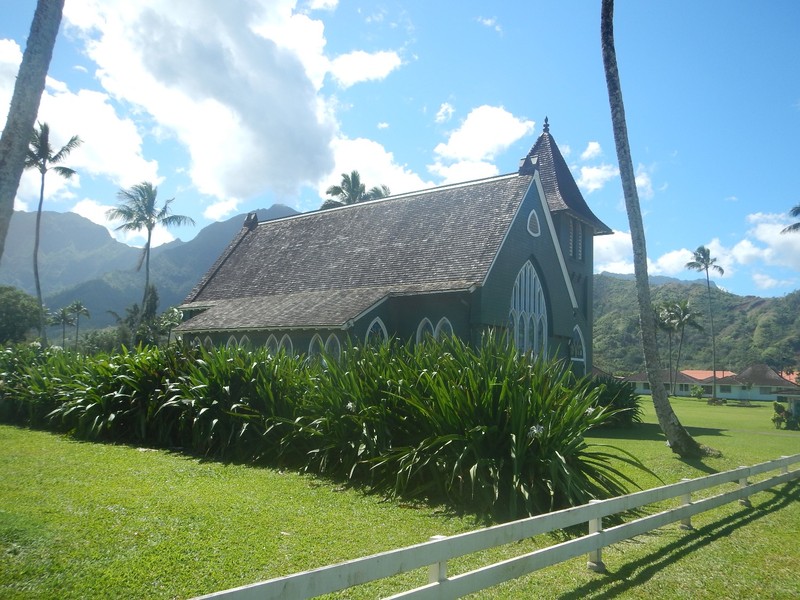 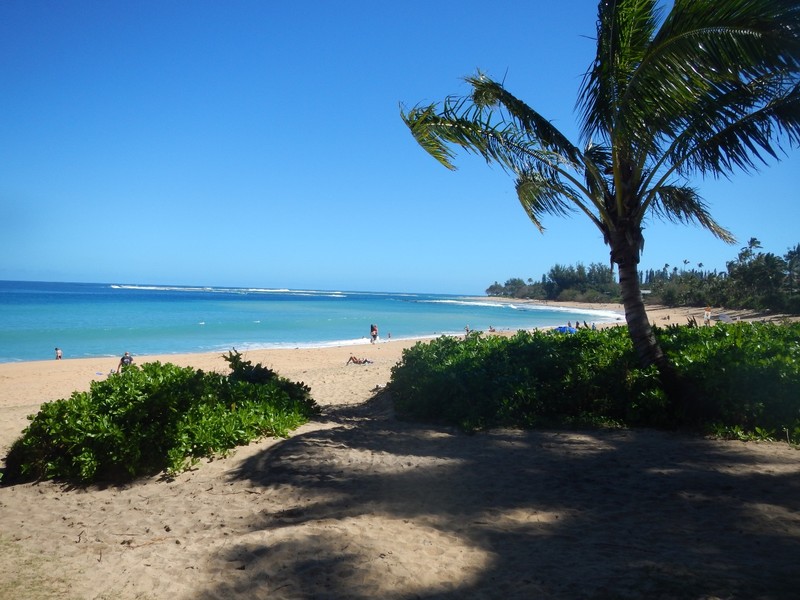 Waimea canyon was just as breathtaking as I remembered from years ago. There are wild roosters and chickens everywhere, more roosters than chickens as I think the later get eaten. The roosters are very colourful and I spent a couple of afternoons trying to paint a picture of one. 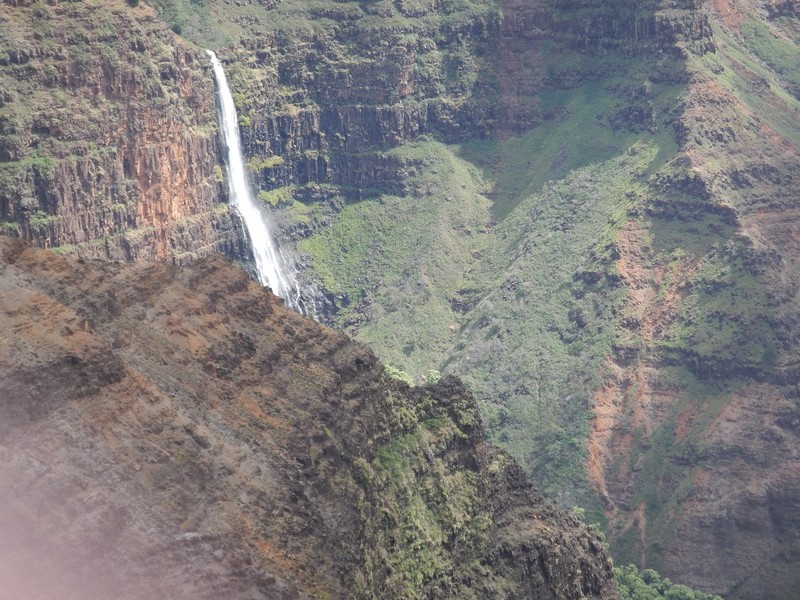 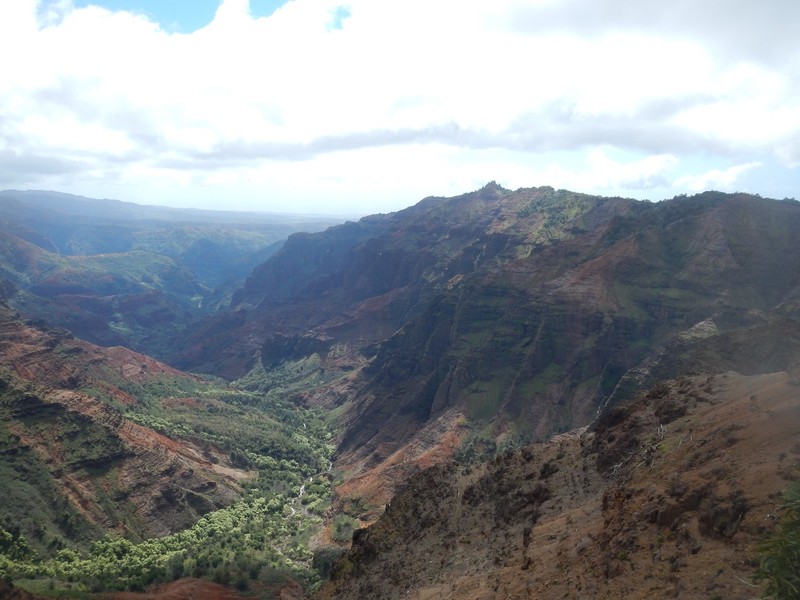 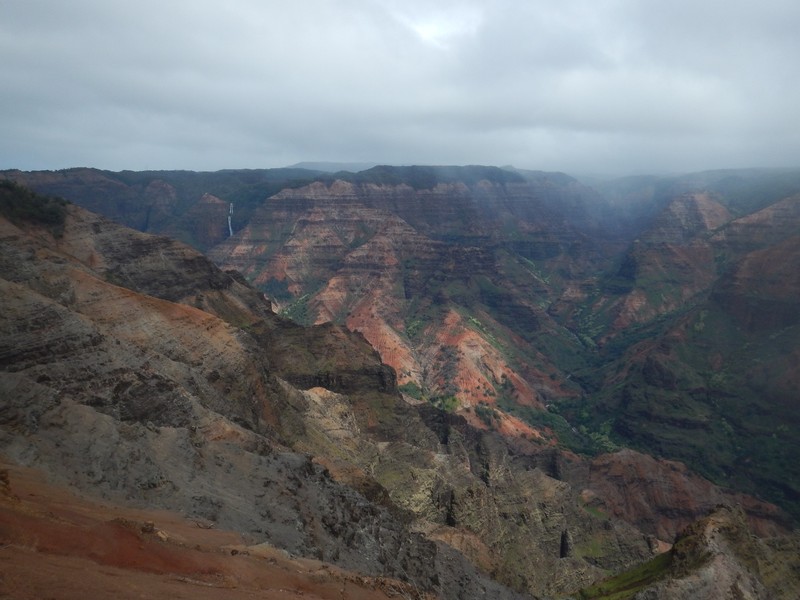 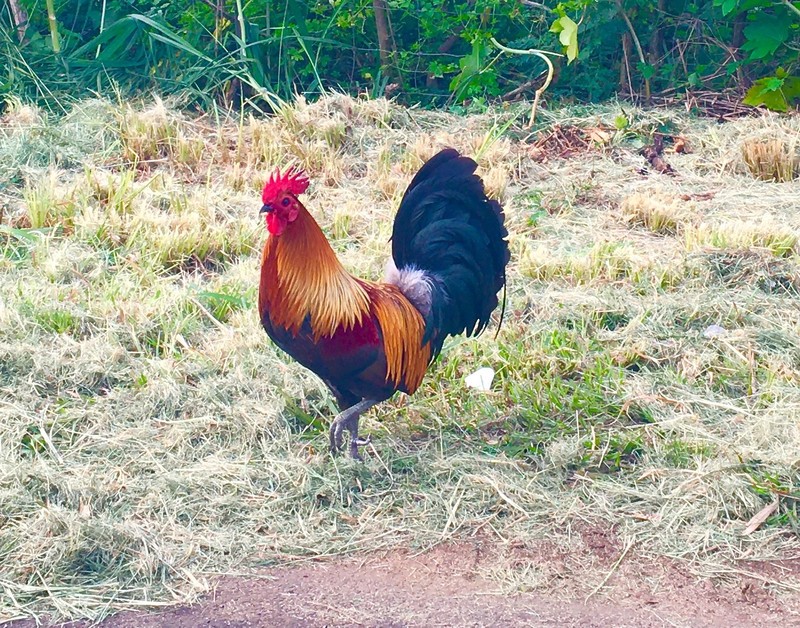 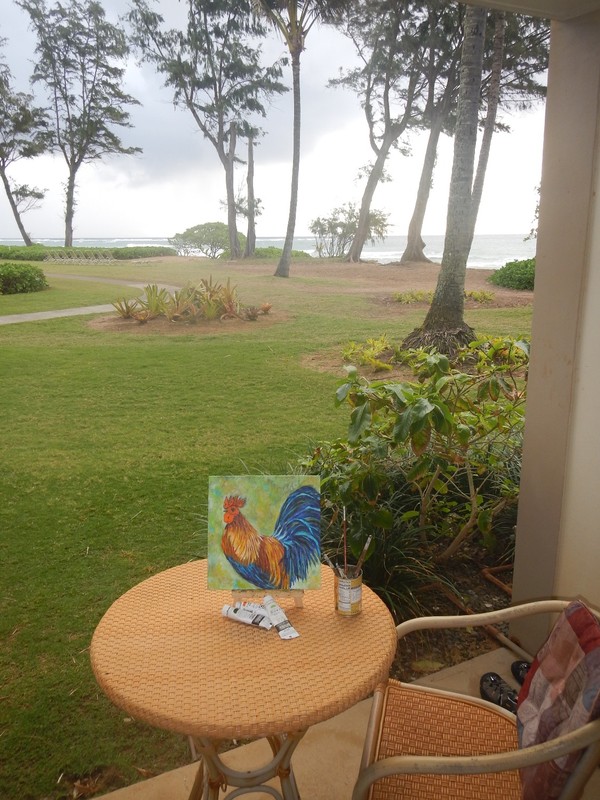 A Whale of a time in Maui

Accomodation:
Maui was a one bedroom at Kahana Villa and then Paki Maui. They were both fine but next time I want an ocean view.

Food: Because we had kitchens we made most of our own meals. Shopping was done at Safeway Lahaina and the Farmers Market in Honokowai. (which was great). I am really going to miss fresh papaya and pineapple every day

We did go to a couple of restaurants and those we really enjoyed were : Fork and Salad in Kihei (twice), The Flatbread Company in Paia. CJ’s Deli in Kaanapali and the Lahaina Fish Company in Lahaina.
I am a vegetarian /mostly vegan and did not have any trouble finding items on most menus.

We also went to Frieda’s in Lahaina, the most expensive and least impressive. Not much flavour or pizzaz in the food to me.

Beaches: I love to snorkel and my husband loves to swim so quite often that is what we would do. Our favourite beach was Kapalua beach and as long as we arrived before 9AM we usually found parking in the free lot or on the street without a problem. Got to swim with turtles, saw lots of colourful fish, octopus and some coral that still had colour.

We stopped at a few between Ka’anapali and Kihei just for a swim and they were good as well as the beach on Kaanapail in front of the Sheraton at Black rock. Again we went early and found parking in the free lot. I was not impressed with the snorkelling there.
But nice swimming and a beautiful beach. 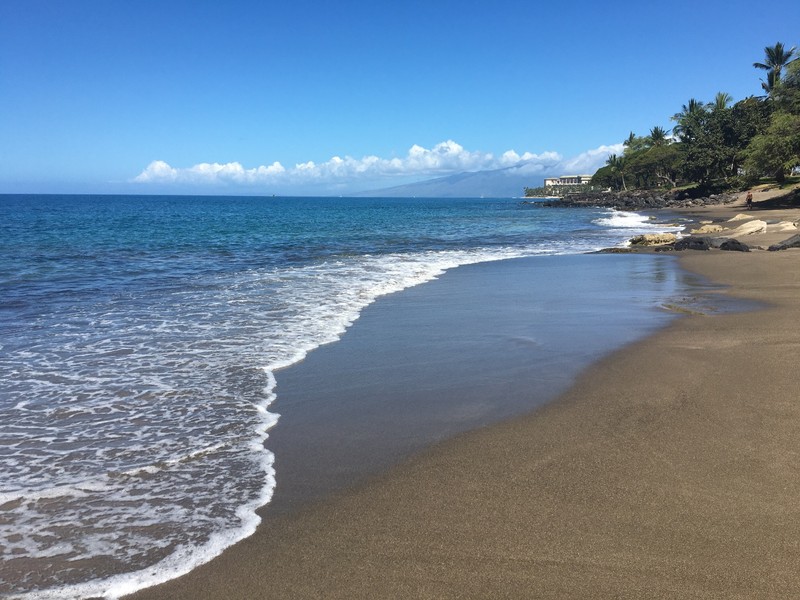 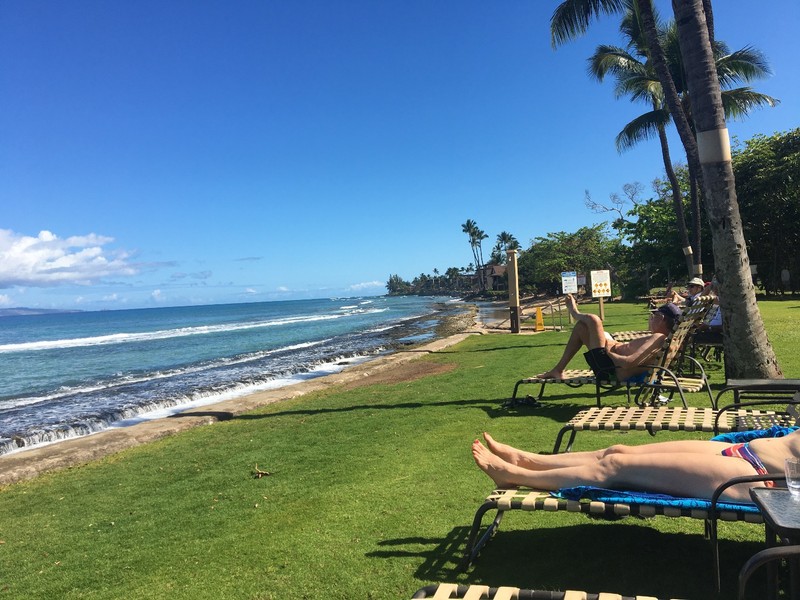 We also stopped for a swim near Wailea and noticed the water felt warmer down south .

Weather: There was a couple of days of high winds and one day that also included a lot of rain but most days we just had a gentle shower here and there. Or a short deluge which seemed to start and stop out of no where.
The temperature was great for us. We don’t like a lot of heat so the 25 C ( 80F) temps were perfect. Lots of clouds rolling in and out but that is pretty normal and it kept it cooler as well.

Tour: We only did one tour a Saturday snorkel tour to Lanai with Sail Maui. The boat held 49 but there were only 8 of us which was nice. We saw a few whales of course and the snorkelling was pretty good, but not amazing for me. The crew and the boat were great however. Next time I would opt for a whale watch with the whale foundation. 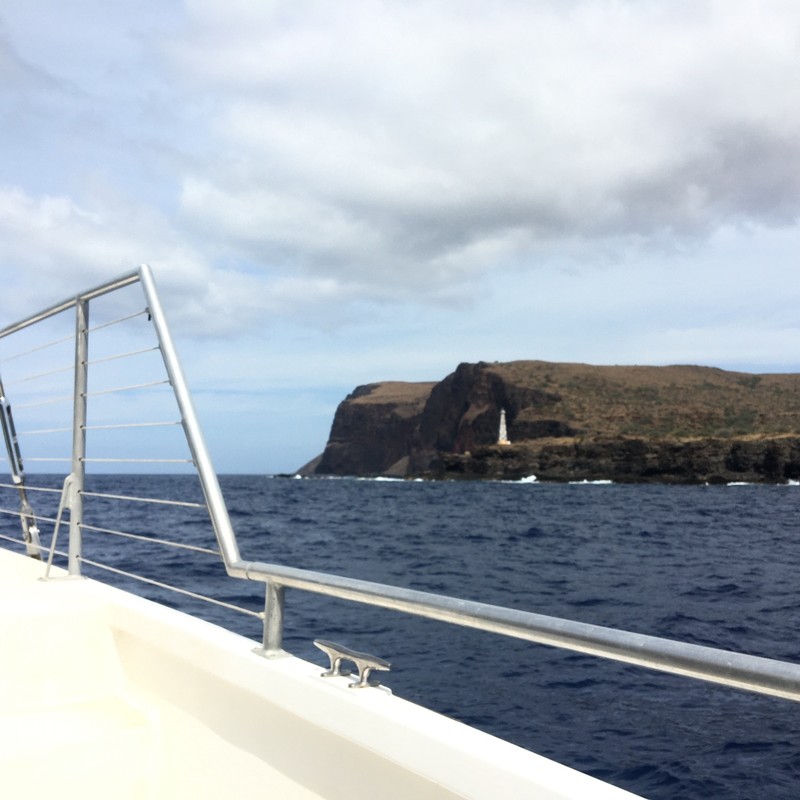 In the early 80s I drove the road to Hana and vowed never to do it again, but I wanted to see the rainbow eucalyptus so we went. I bought and downloaded the Shaka Guide which was great. It pointed out things and where to stop and on the return gave a lot of interesting information about the history of Hawaii. Highly recommended . The road has improved immensely since then and we enjoyed the trip. Next time I would like to spend the night in Hana to have a lot of time at the park just past there. I came back to the condo with a beautiful tropical bouquet that I bought on the side of the road for only $5. 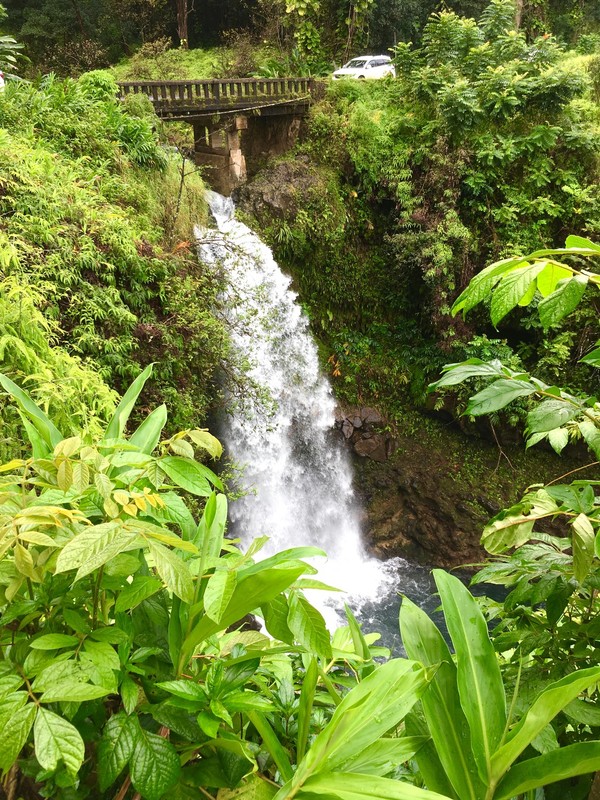 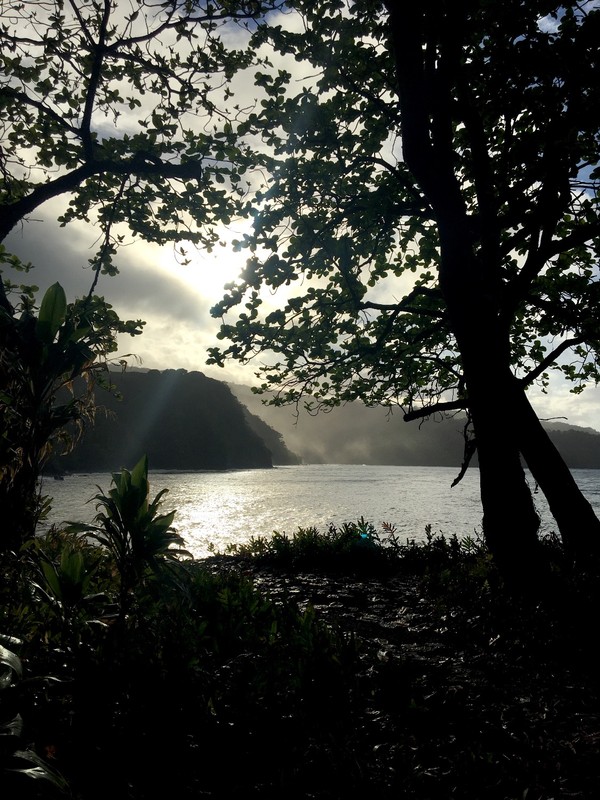 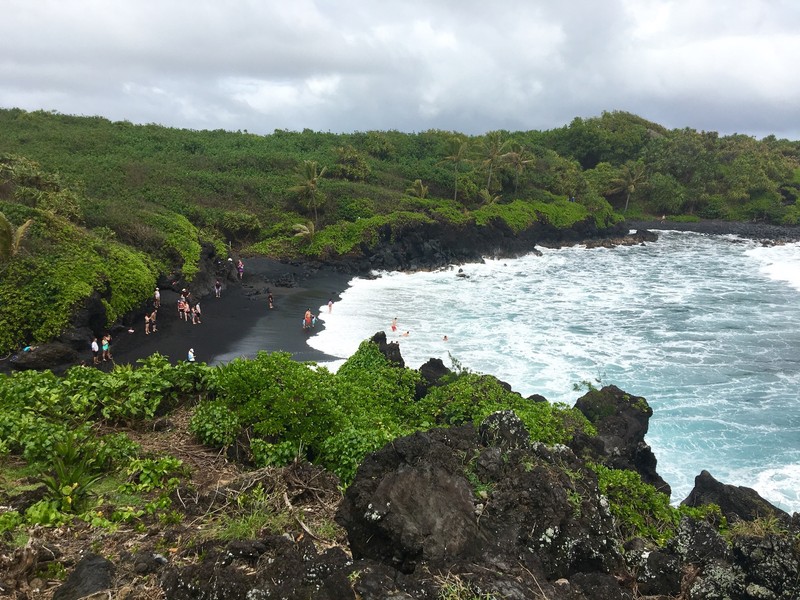 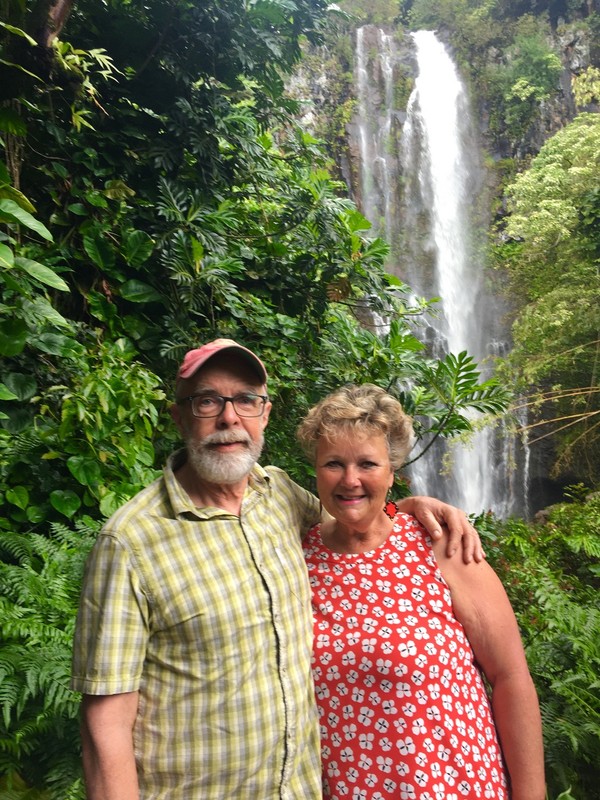 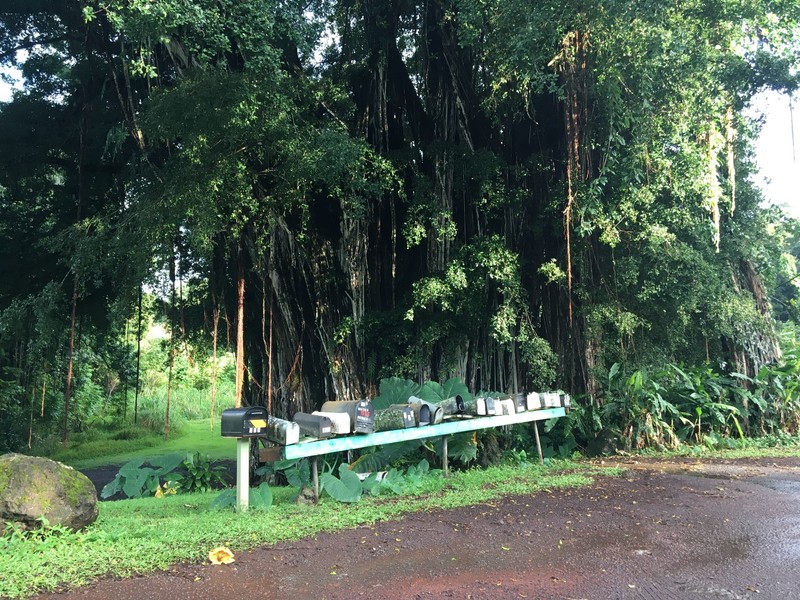 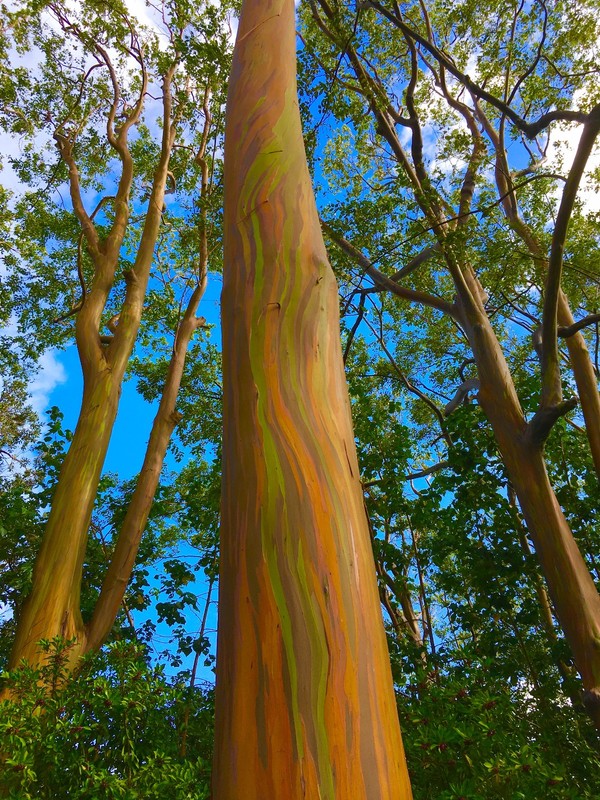 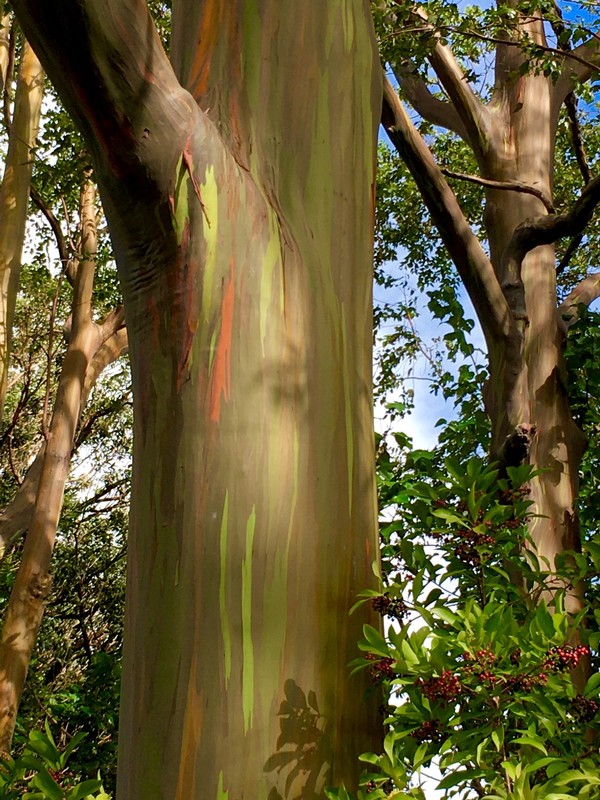 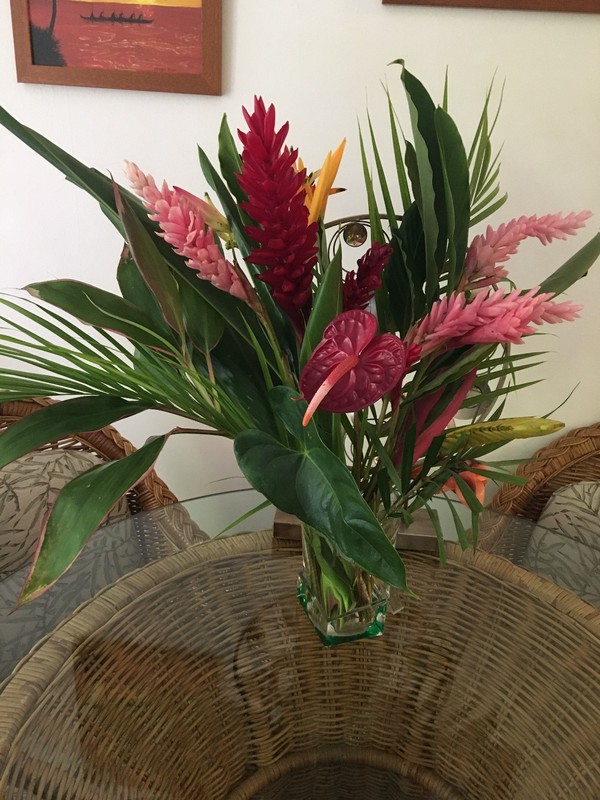 We really enjoyed spending time in Paia town and next time want to also visit Makawao as it looks great.

We did quite a bit of driving and exploring which included the beautiful Iao Valley. 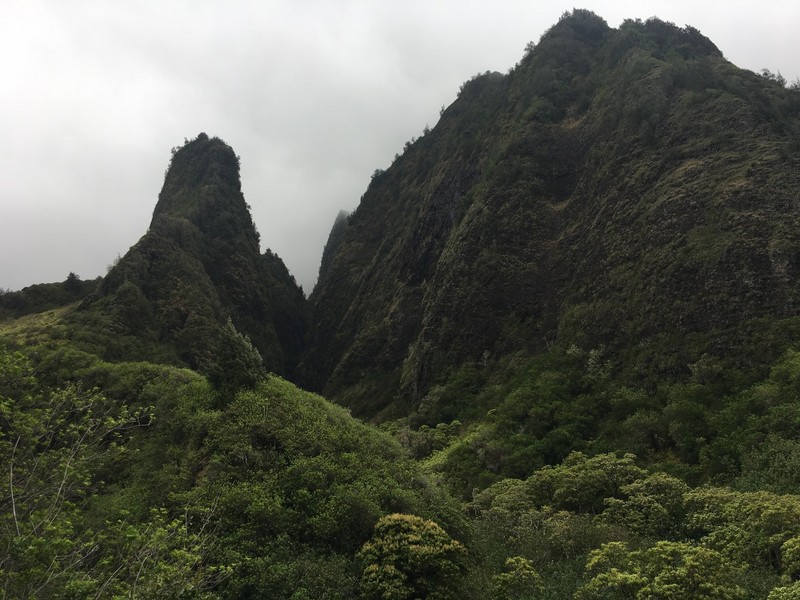 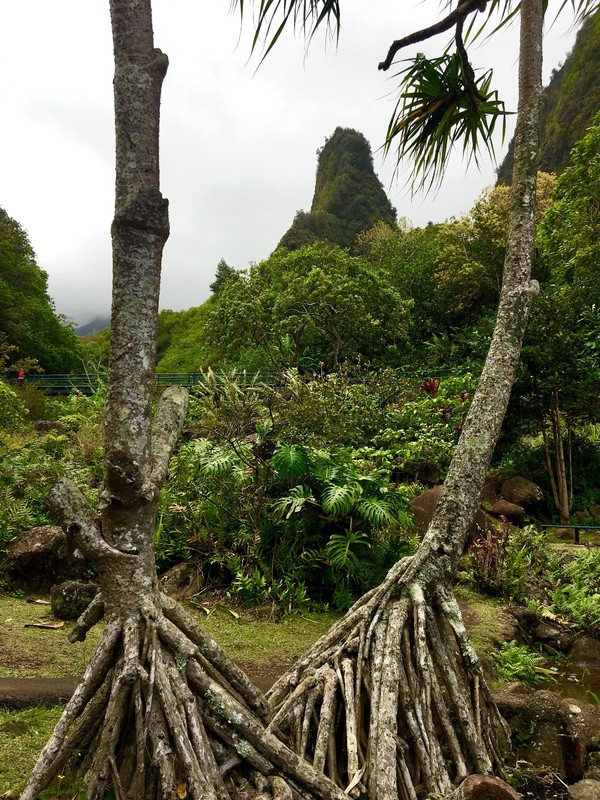 One night we attended a slack-key performance at the Napili Kai Beach Hotel . My husband is a musician so this was a must for him and did not disappoint. Very talented and entertaining men and a couple of hula dances from a lovely woman as well.

On our last day we attended a two hour free lecture at the Humpback whale foundation in Kihei and it was fascinating. The woman giving the talk was not only informative but delivered with such humour and personality that it made it that much more enjoyable. I learned so much and have now decided that the humpback is my favourite whale.

My overall impression: It has been 25 years but to me Hawaii has not changed. I still get that feeling of Aloha here. Everyone is so nice and friendly and seem happy. I never heard a cross word or people getting angry. As a tourist I feel very welcomed.

Sitting on the beach I am not constantly saying ‘No thank you’ to beach vendors.
If someone is friendly and comes to chat with me its not because he wants me to visit his uncles carpet shop.
Not that there is anything wrong with either of the above. it just make Hawaii such an easy vacation.

And the beauty of the islands are unlike anywhere else. The many shades of blues in the water, the various kinds of palm trees, the spring flowers coming into full bloom and lets not forget the whales. Sitting on the beach and watching the whales breech and tail flap over and over again is truly magical. I can never get enough of it. 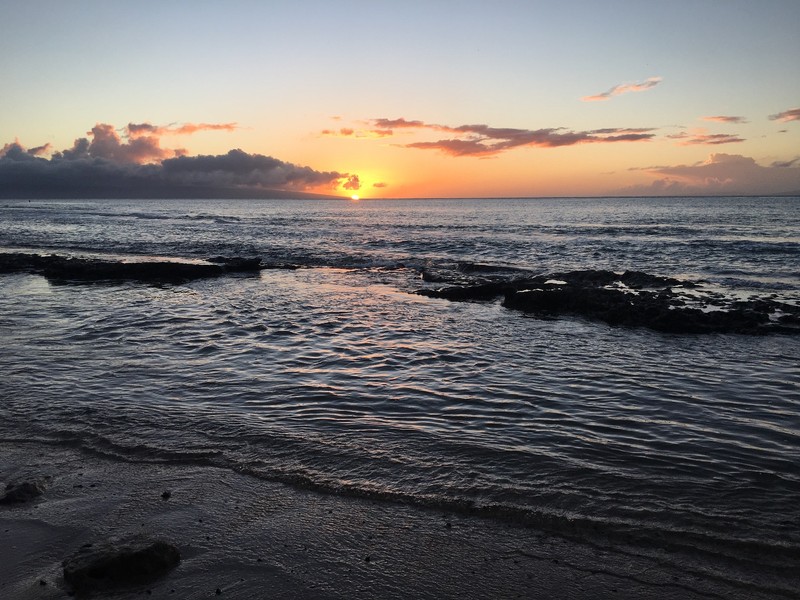 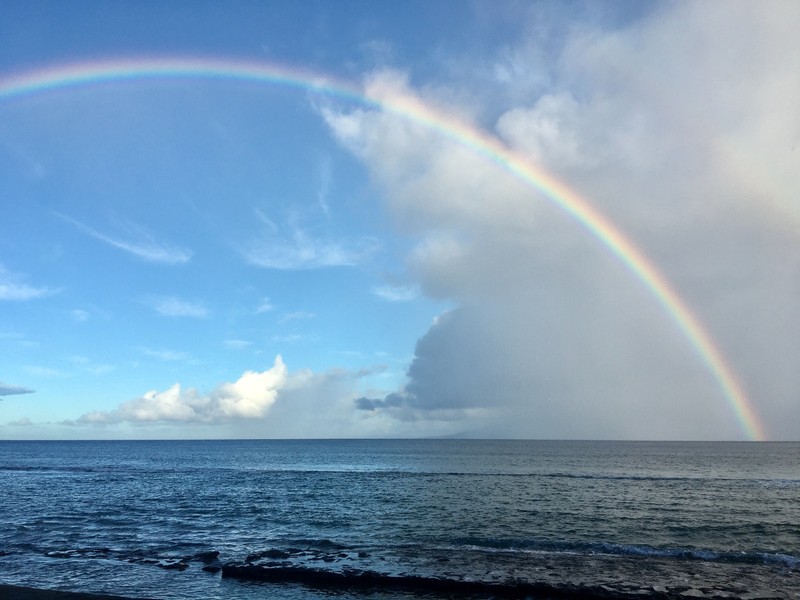 So Maui we shall be back. Maybe even next year. I missed you and love you even more than I did before.