Off to a rocky start

Originally this trip was going to be Doug and I and Jane and Jimmy but both of the guys decided they didn't want to come for various reasons. For Doug it was mostly the heat which he doesn't like.

Jane and I met in Vancouver and took sky train to the airport arriving in plenty of time for our 1 PM flight to Saigon (Ho Chi Min City) with a stop in China. I found a great fare for $688 CDN return on China Southern airlines and we were very impressed with the airline. They left a few minutes early and the plane was very clean and modern with friendly flight attendants. It was a full flight and we spent the first 12 hours watching non stop movies with a little snooze now and then. The second flight I barely remember as I slept through most of it.

Upon arrival in Saigon we deplane and board a bus then drove for ages to get to the airport.
I think this is the longest drive yet, even more than Frankfurt . We had already pre purchased our Visa on Arrival, but the line up to buy one was very short so it would not have been a issue to get one here. Customs and immigration was fast and soon it was off to get our bags.

Janes suitcase did not arrive unfortunately.

We tracked down some airport staff

"Don't worry. It happens all the time."

It took a while to fill out all the paperwork as there were a number of other people with lost luggage there too. The woman assured Jane it would be on the next flight and at the hotel by 10AM tomorrow morning.

We had a driver waiting for us to take us to the hotel, so we were concerned he would give up and leave,

Finally done we head to the ATM to get some Vietnamese Dong and find a fellow with my name on a board which is always a great sight to see.

Saigon is huge, it took about 1/2 hour to get to our hotel, Bich Duyen

He had to park on the side of the road and we walked a block and a half to the hotel, down an alley which had many other small hotels and hostels. Our shoes need to be removed before entering, the place is spotless. A very nice young man checked us in and Jane told him about the luggage.

He says " don't worry it happens all the time"

He took the paperwork from her and we went up to our room. Spotless and lovely.
The price is $25 a night including breakfast. It is now midnight Vietnam time so we head straight to bed and thankfully sleep through the night.

After breakfast we walked the neighbour hood for a while and popped into.a couple of shops to look at the very tempting textiles and laquerwear.

I bought a fabric purse and Jane bought some little purses and some postcards. The airline had already called the hotel and said the suitcase would be there in an hour.

A woman on the street was selling cut up papaya and pineapple which we bought and then went into a bakery to get two croissants. The prices are so cheap. 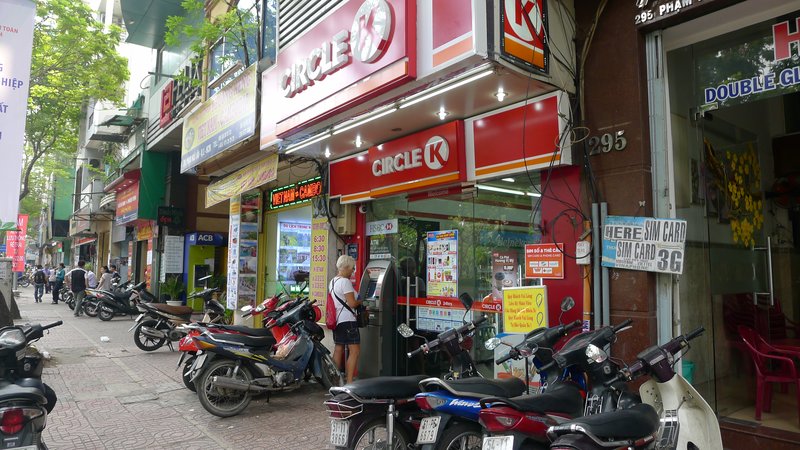 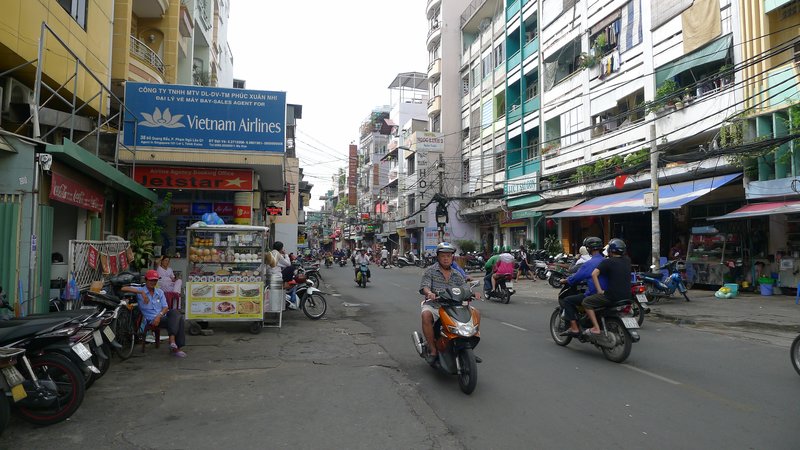 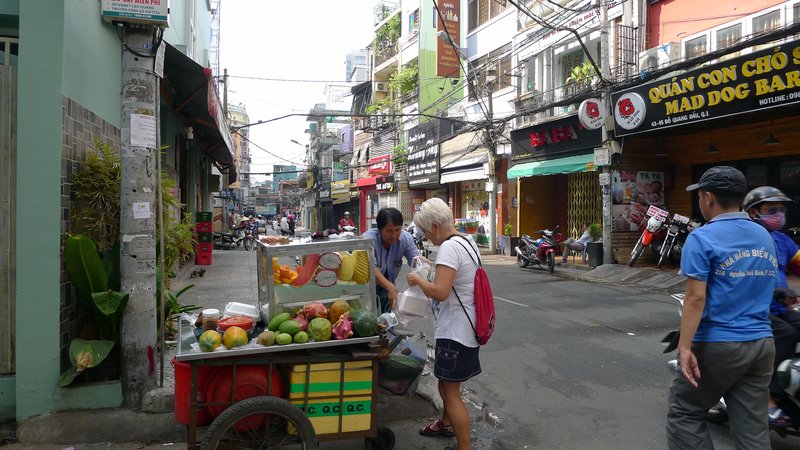 Janes suitcase is at the hotel. YEAH. A quick packing up and our hotel arranges a cab to take us to the bus station. Our diver, HI, gives us a price of $50USD to take us in his car. We decline and then when we get to a bus depot they tell us the price and we realize it is a good deal after all so take him up on the offer.

Hi does not speak much English and figures that the louder he yells as us the more we will understand him.

The money here is all paper, no coins which is great, but inflation must have really hit at some point because the bills are huge. One million Dong is $59 CDN.

When we found out the price for the bus ticket it was quoted in dong and we converted wrong. The bus was actually MUCH cheaper. We thought it was $45 CDN for both but it was actually only $4.50
Oh well . Rookie mistake

Our fruit and croissants were enjoyed en route. The skies opened and the rain was torrential accompanied by thunder and lightning. Most people on the road are one scooters or motorbikes and they are getting soaked even through the rain jackets.

In and hour and a half we reach the town of Ben Tre, our destination, Hi pulls off the road and calls our hotel, and then a very lengthy and what sounded heated argument ensued . He was yelling very loudly. It seemed to go on for ever and then finally Hi passed me the phone.

The hotel owner was on the other end and explained that his hotel is another 20K and he wants more money to drive us. We told him Ben Tre but this is much further than that. He needs another $15US. Well of course we had to pay it, what else can we do? The owner is away for a couple of days but will keep in touch with us by phone.

We are driven to a ferry where we walk on and his uncle will pick us up on the other side
I told Tan, the hotel owner on the phone that I was wearing a red top and Jane a white one,
He goes " ya ya, it's okay"
Well we were the only tourists on the boat so stuck out like a sore thumb. I guess he figured that they would figure out which ones we were.
There are two men with motorcycles waiting. The one man passes me the phone, and the owner explains that they will drive us on the bikes
"With our suitcases."?
Yes no problem

And it wasn't. We went down a few large streets, much quieter than streets in Saigon, and then down smaller roads until we were on what looked like a sidewalk. 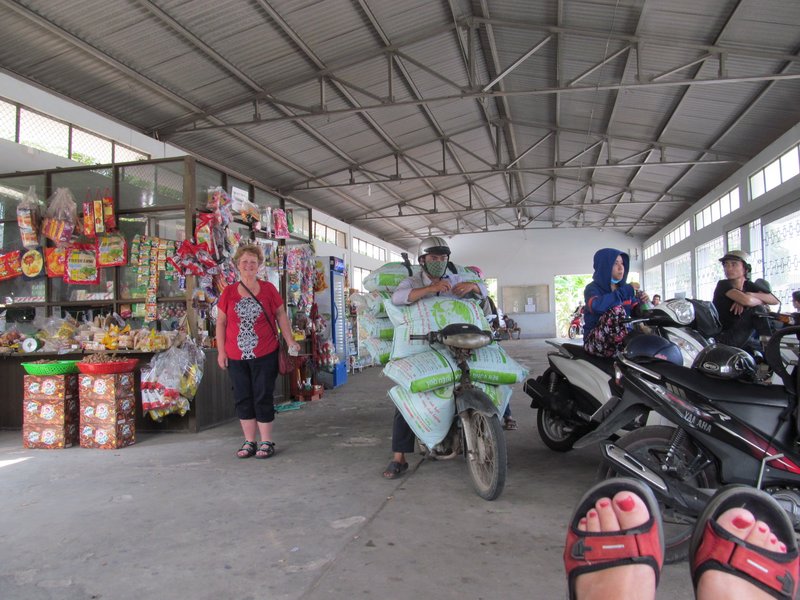 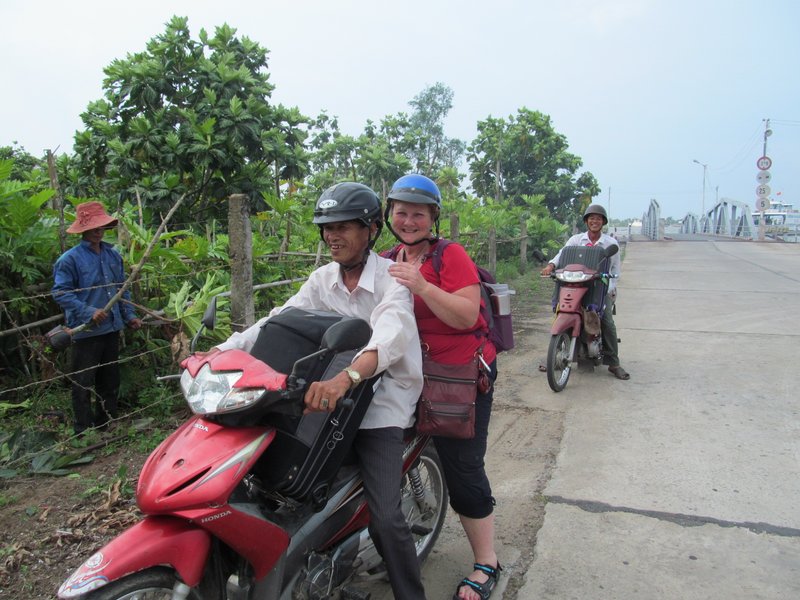 Our hotel does not look at all like the webpage. We are a little lost for words. It is a home stay on the river, far from anything and it is not clean

We are shown our room which was supposed to be a room with two beds, private bathroom and air conditioning.
None of the above.

We each had our own room with a double bed that had a mosquito netting over top. A small desk and chair were in the room, a dirty fan, a window without a screen and many big holes and gaps in the walls from the floor so that Mosquitos and bugs had the run of the place. The tile floor has not been washed for , well maybe never

The bathroom was down the walk and around the corner.

The bedding was clean which was good but there was no top sheet and only a big heavy fleece blanket which would not be used here at all because of the heat. 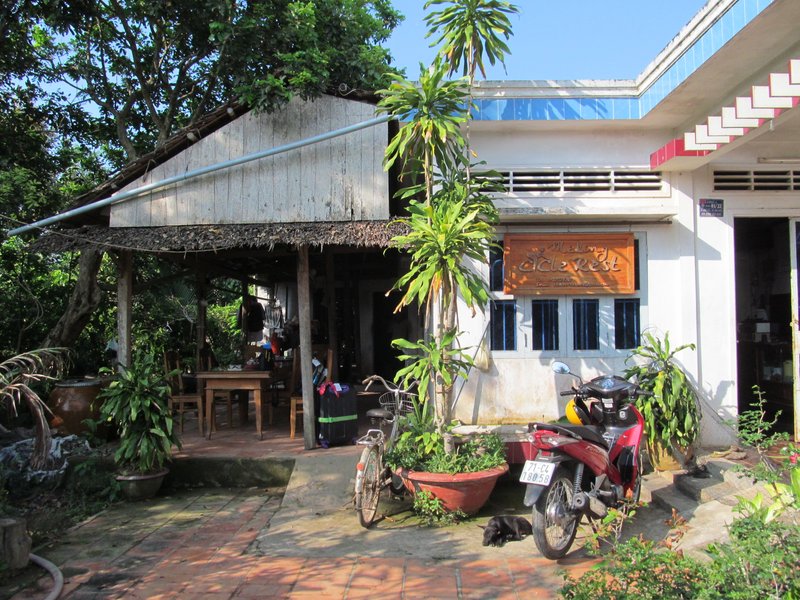 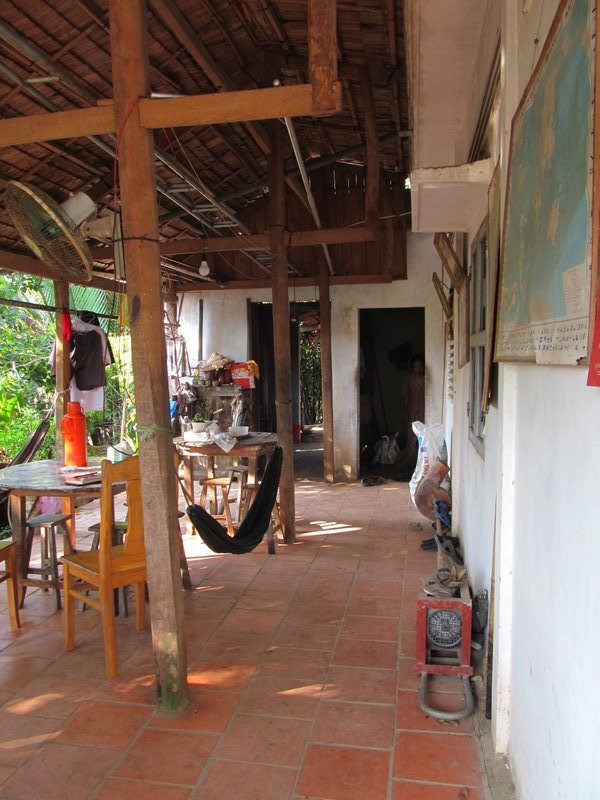 Jane went to use the bathroom and found a spider the size of her fist on the back of the toilet, she came back later and found him under the rim , toilet set. Thankfully there are two bathrooms

After a sleep we are called for dinner. I really didn't eat much of anything, Jane ate lots and said it was good. There was lots of food but most had meat in it. I just did not have an appetite.

Oh I forgot to mention that none of the family speaks any English what so ever. Only the one that is away for a few days so it makes it rather difficult to communicate. Even the kids don't speak any, which normally would not be an issue because we have google translate, but there is not any internet. Communication is pretty much impossible

Jane and I made the decision that we are not staying. We know we still have to pay for it, but we need to go.
We were able to communicate that we need to talk to him on the phone and said we needed to arrange a transfer in the morning to catch the bus to Saigon.

I woke at 5 AM to a loud blood curdling screech from Jane in the next room. I thought she was being murdered.
" Jane, what's going on?"
That spider in the bathroom has moved into the bedroom and is beside her suitcase.

At breakfast Jane shows me a very large snake hanging and writhing from a tree to die. I asked the young girl in sign language if the snake was going to be dinner, which she confirmed with a big smile and nod of her head.

After our breakfast we were taken to the end of the road by the father and 16 year old daughter
to catch our bus. The daughter put Jane's suitcase on her electric bike and Jane jumped on the motorcycle. I was told to wait.

The girl waited with Jane while Dad came back for me and my suitcase. In half an hour the bus came and for the next three hours we were on the road back to Saigon. The family really was quite lovely but we could not communicate and it just was not clean and too far from anywhere. It was also very misrepresented on the internet which I will send an email to the owner and put on trip advisor

What are we going to do now? A hotel lobby near the bus depot in Saigon let us use their wifi while we searched for nearby beach towns, but they all involved another four hour or more bus ride.

So, plan B. We went back to our hotel the Bich Duyen because we loved it so much and will try to change our plane ticket to tomorrow instead of two days from now.

Success. And they did not charge us a fee either. Our hotel in Hoi Ann will let us stay an extra night, for $24 US. It looks great so I hope it is true to the website this time. He will pick us up at the airport too.

We are famished and in search of food, which we found and enjoyed immensely. A bit of a walk about town and then back to the room to rest up for our flight tomorrow . Saigon is really very busy, thousands of motorbikes and people and noise. It is all quite exciting but we both prefer the smaller towns. 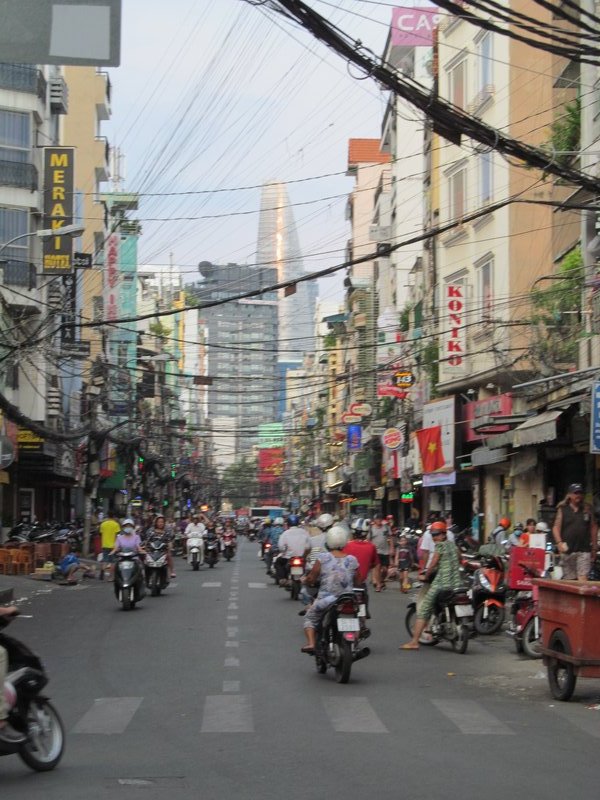 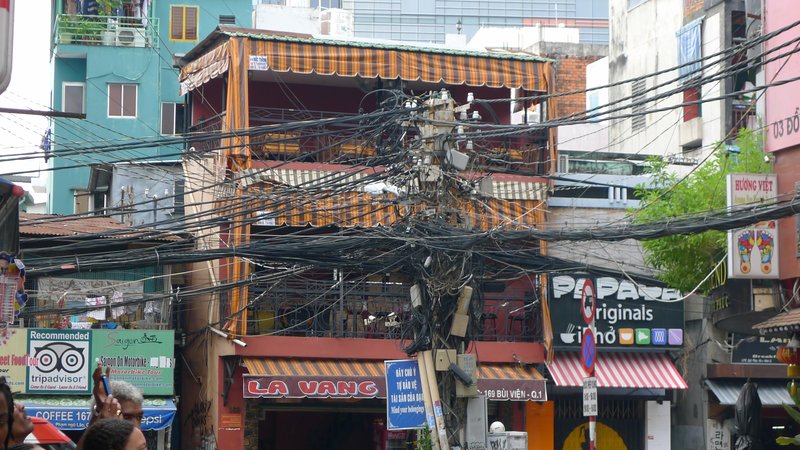 Off to Hoi An