Trogir is an island connected by bridges on both sides to the mainland. Sardines were on the menu for lunch today for Doug which he enjoyed a great deal. He remembered having them in Yugoslavia in the early 1990s when he was here and had been anticipating them for weeks. Apparently they did not disappoint.
Our leisurely walk around the island took about 15 minutes. There are many large sailboats tied up for a regatta that is taking place. Large tour groups and individuals come from Split for a day trip to Trogir exploring the narrow alleys with the many shops selling jewellery wine and souvenirs. 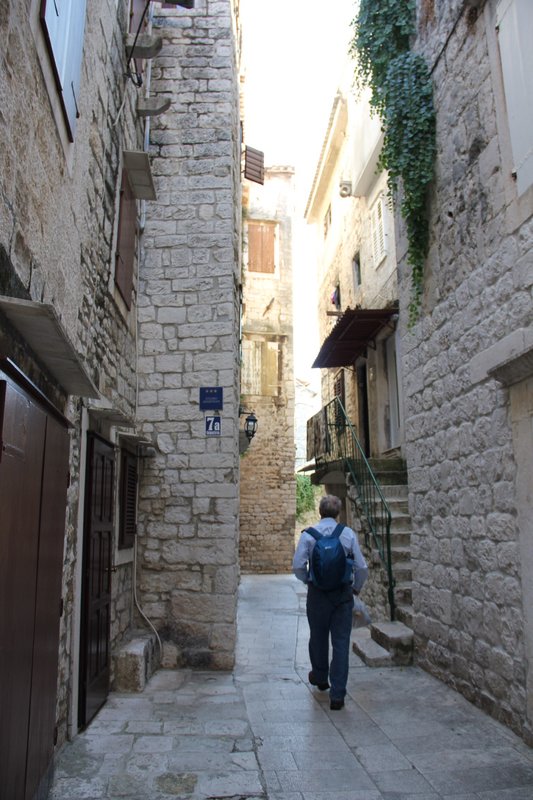 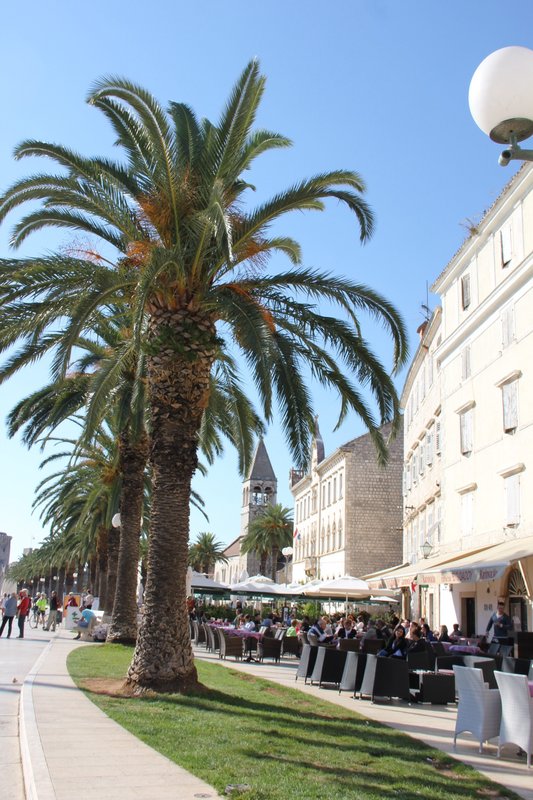 Day 26. There appears to be a huge church bell ringing in our room at 5:30AM. It sure sounds like it is in our room. Who thought 5:30 was a good time to wake up? I just get back to sleep and another set goes off at 6:30. No call to prayer here though, all Catholics.

After breakfast we caught the bus to Split for a few hours. Doug notices a huge difference from when he was here last. The small boardwalk has been redone in the past couple of years and is very wide with palm trees and vendors lining the walking street which hugs the Adriatic. On the other side are many outdoor cafes and behind lies Diocletions' Palace. This palace is huge, probably two or three blocks long. 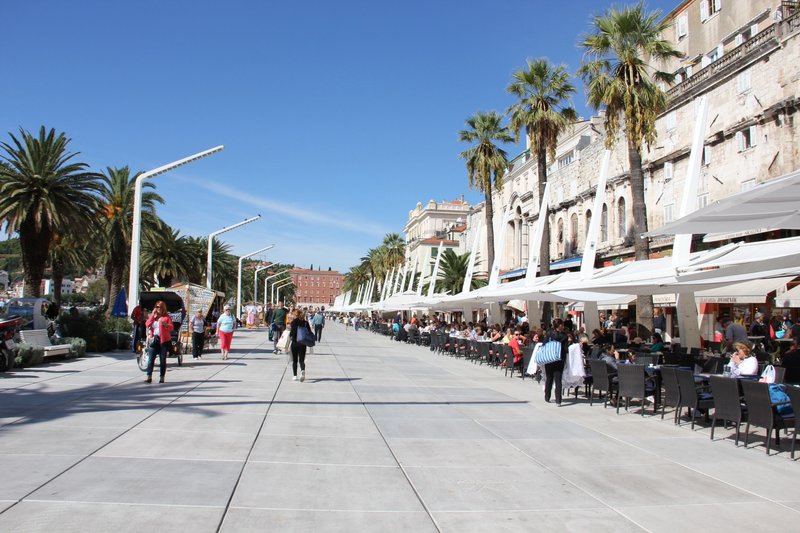 The sun is out and it feels so great to have the warm weather and blue skies.

We hired a guide to take us through the palace and she was worth every penny. Unlike many other Unesco sites, this area still has people living and working inside. We considered staying in Split instead of Trogir and a couple of options were small hotels inside the walls of this Palace. Hotels, stores and restaurants line the narrow cobblestone streets. 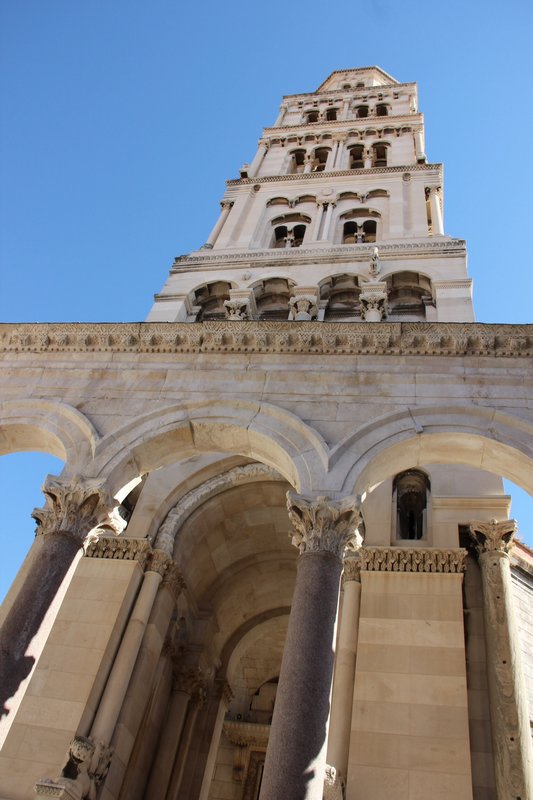 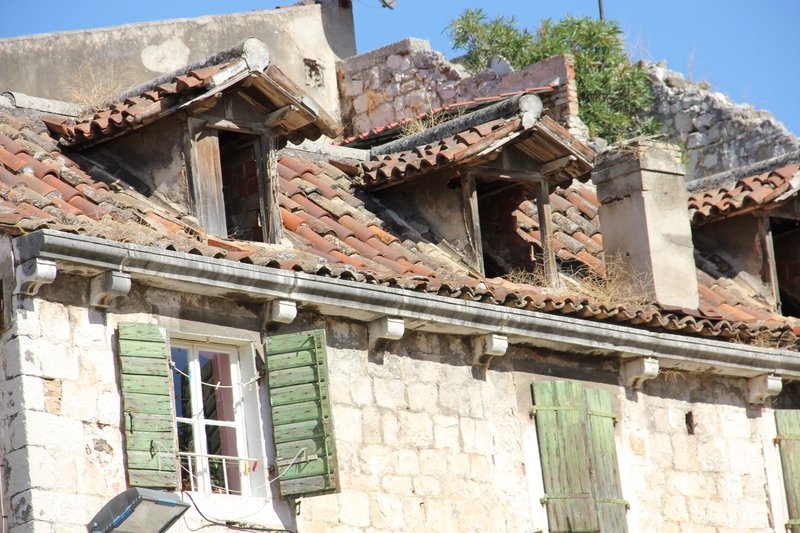 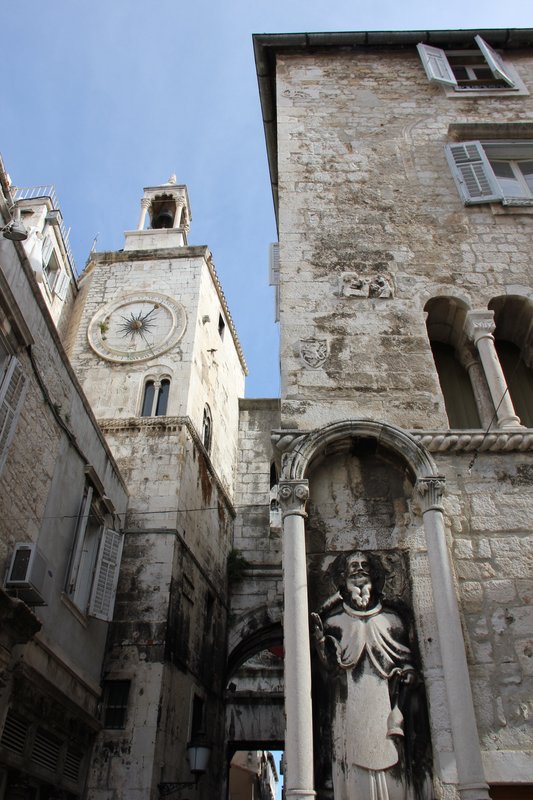 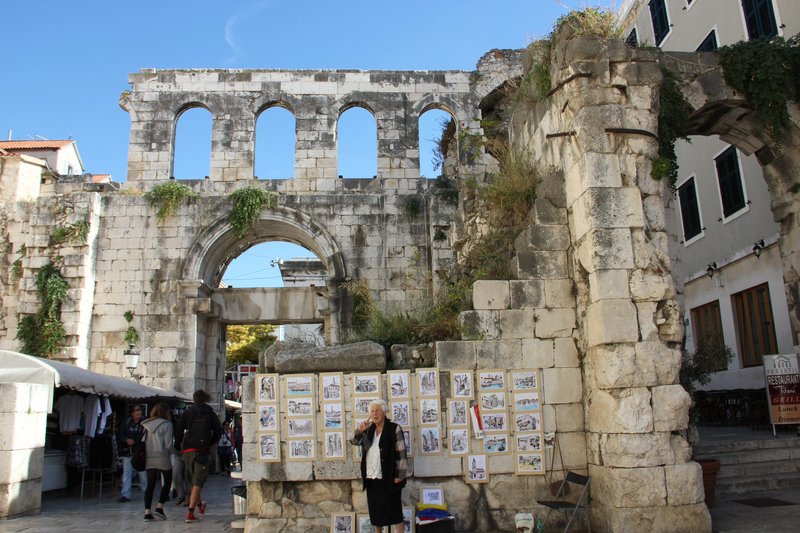 Diocletions' Palace was first built in the turn of the fourth century. Diocletion was a soldier who rose through the ranks to became a Roman emperor in the year 284.
He had the palace built as his retirement home. Over the centuries it has been modified a number of times, but there are still many of the original walls and statues today.

We missed the bus back and had to wait an extra hour which made for a very long but enjoyable day.

Day 27. It was a very relaxed day, partially due to the weather which has turned on us again. We walked across the bridge but did not find anything of interest on the other side. A fortress tower was at the far corner of our little island so we climbed to the top and enjoyed the expansive view it offered. 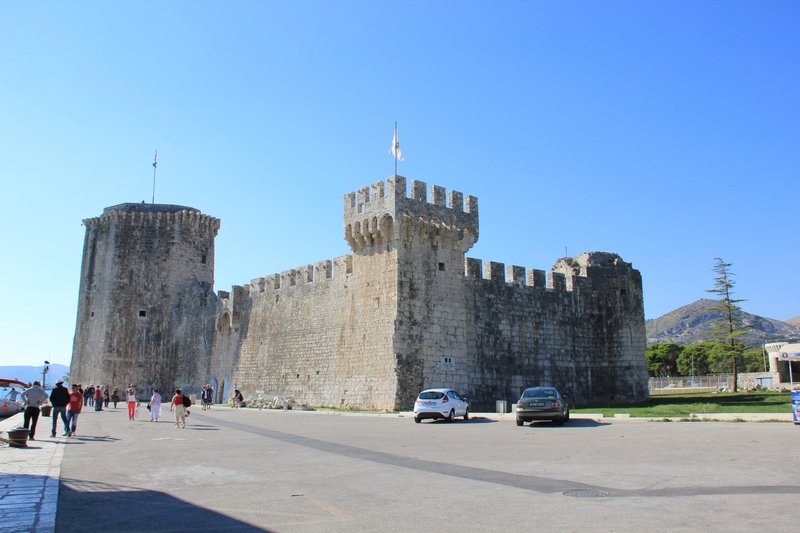 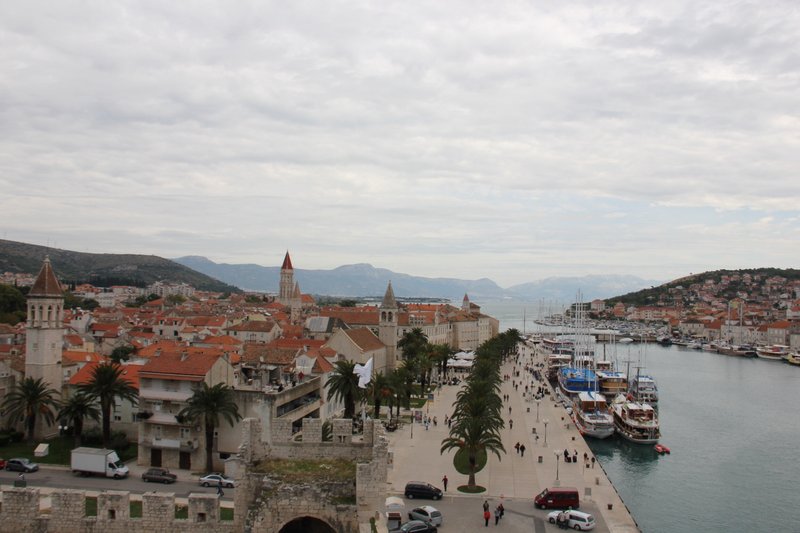 Today is Sunday and the Church bells rang quite frequently. We came upon a small monastery and went inside to look around. I think they may be the ones who have the bell at 5:30AM.

A number of large wooden boats are tied up, with cabins for passengers and bicycles on the dock to use. These boats go from island to island over the course of a week and you use the bikes to get around when you dock. The prices were not that bad and if we are able to come back to Croatia in the future I would love to do this.

The skies opened so we went back to our room and read for the rest of the afternoon and evening which was just fine with us, some well deserved down time.

Day 28. Check out was at 10 so we left our luggage and walked for a while and then had lunch at a sidewalk cafe where the sailboats had been the day before.

The one o'clock bus to Split had us there early for our 4PM boat to the island of Brac so we sat on the boardwalk and nursed a couple of drinks for two hours and people watched. The rain held off for the day so we felt very fortunate.

One hour on a catamaran took us to the town of Bol, on the island of Brac and we were instantly charmed by the place. Our one bedroom apartment is a five minute walk from the port and has a balcony overlooking the sea. 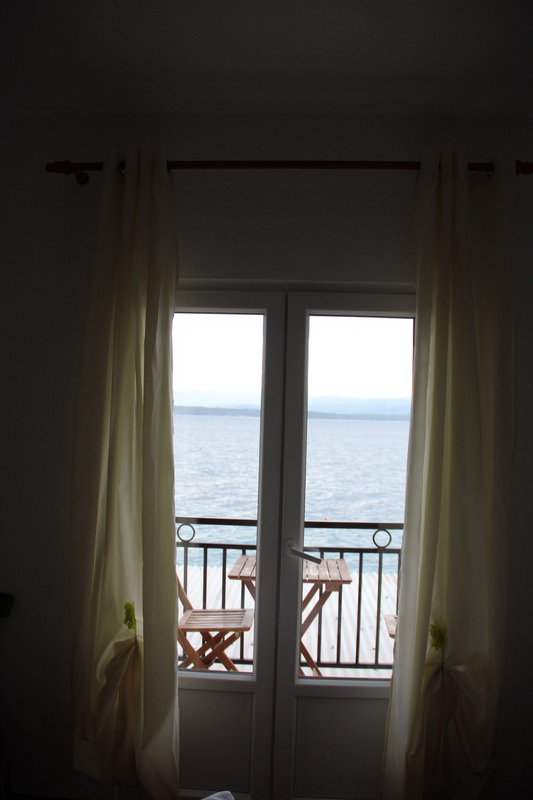 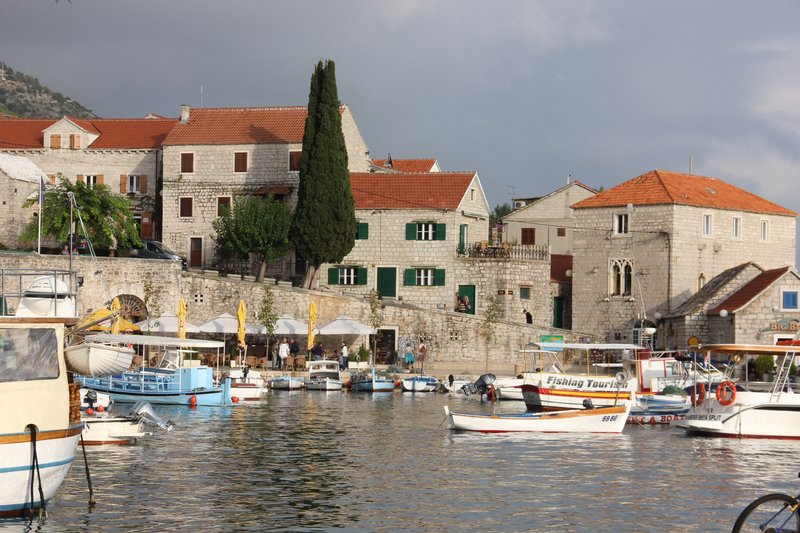 Oranges, grapes, cheese, meat, eggs and bread were purchased for our breakfasts before stopping for dinner at sidewalk cafe. A young man played guitar and sang while we ate and made for a wonderful evening.

Day 28 Turned into an inside day today. Torrential rain greeted us this morning. At 11AM there seemed to be a break so we went for a walk along the sea wall only to have the skies open after ten minutes. That would not have been too bad except that it was accompanied by howling winds so from the raincoat down we were soaked and lost another umbrella turned inside out. Headed back and spent the day reading, playing cards and having a relaxing day. Very thankful for the large apartment to spend the day in. We ventured out at 7PM for dinner at the same place as it was close and we enjoyed the food and music the night before.

Day 29. Could the weather get any worse? Apparently so. The forecast looked very dismal. Our landlady came up with cake in hand for us, feeling so badly about the weather for our sake.

There was a break in the rain at 11AM so we dashed out for a walk. A wide pedestrian walkway follows the coastline and we follow it for just over half an hour. There are many vacation homes and three large hotels along the way as well as vendor carts which are locked up for the winter.

We came to a large beach area and sat on the lounge chairs and imagined what it must be like here in the summer heat with hundreds of tourists sunbathing and swimming in the crystal clear sea. I think I need to come back when it is warmer. 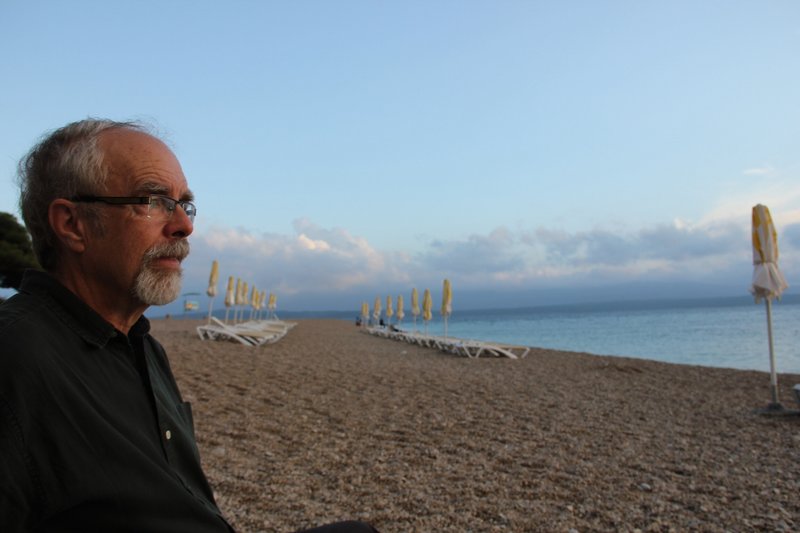 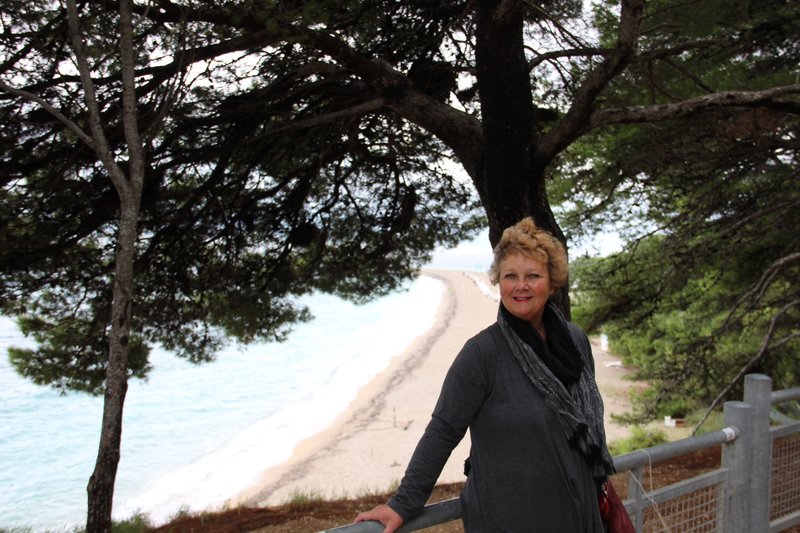 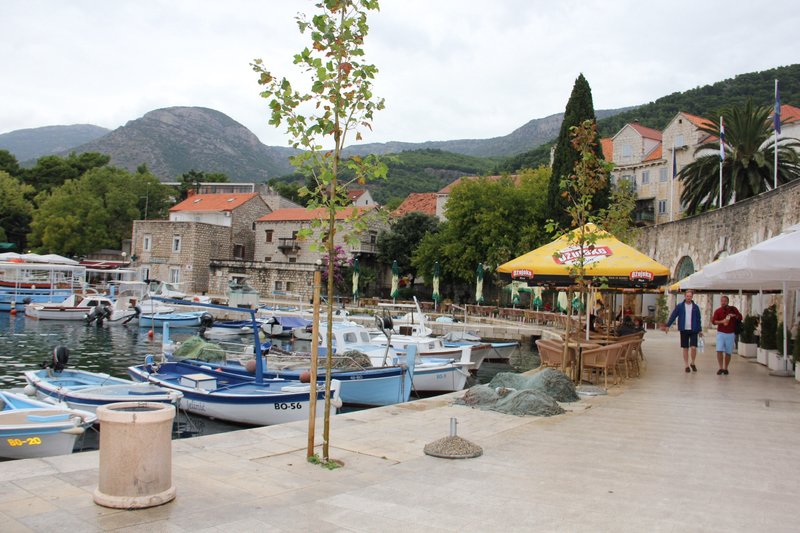 On our walk back the skies opened again and we went home to dry out and rest.

I was woken from my nap by something shinning in my face. What is that? The sun?
Quick, lets go for a walk! Once again we went to the beach at the end of the boardwalk and watched a few brave souls go swimming. This was a gift as the forecast said it would get worse.

Tomorrow we will take the boat back to Split early in the morning and then take a bus north. We are not sure where we will spend the night at this point, we will decide that tomorrow, but hopefully we will find some sunshine and warmer weather.