Day 11. Budapest welcomed us with sunny skies and a warm 19 degrees. Our hotel was a large palatial home of years gone by. Many, many years gone by. Not much has been done to it in the last century for sure. The location however is perfect. Our train arrived late, around 10PM and the street we were on was dark as was the entrance to our apartment. A young fellow met us, gave us our keys and helped to carry my bag up to the first floor, which was like two floors because the ceilings are so high. The stairwell was very dark, dirty and kind of creepy. Dusting and cleaning had not been done for some time. Our room is in a wing that has a half dozen rooms off a sitting area and is spacious enough. The furnishings are new but the twin beds look a bit dodgy on first glance, but turned out to be okay. Our room was clean and that was more important than the lobby. The location however could not be beat and for $50 a night in this area is just fine.

We are just off one of the many pedestrian malls and we set off in search of breakfast. It is 7AM and the city is waking up, not much open yet but we did find a great buffet. In an hour we are surprised as to how many shops are now open and people milling about. Budapest is awake. 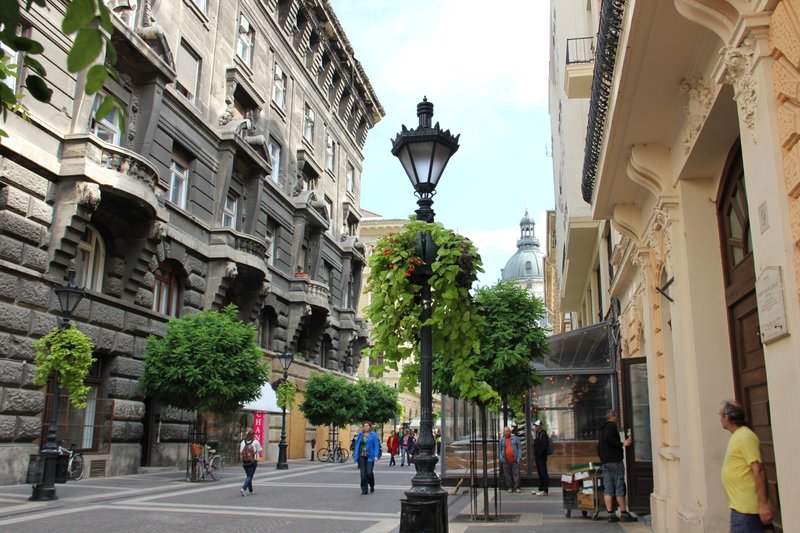 As usual we seek out a walking tour for our introduction to the city and get our bearings. Another International group joins us as we walk around the city for the next three hours learning about the history and landmarks from our entertaining and knowledgeable guide Zoltan.

The buildings were a combination of Baroque, Romanesque Art Deco, and some Renascence and were some of the nicest we had seen. Our guide would point out the stark lines of the communist buildings in between these works of art and how they just did not fit in. 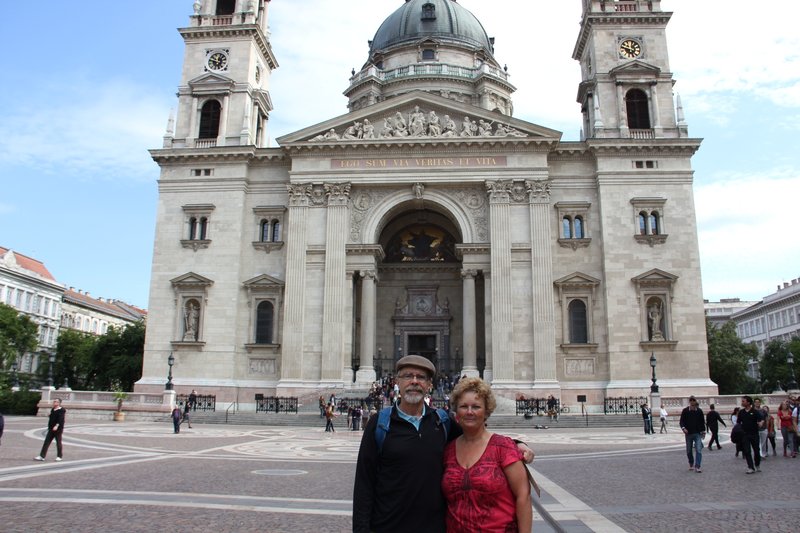 Budapest was actually two towns, Buda and Pest. In the 1800s they decided to make this the capital of the country and each city was too small so they joined them to create Budapest. We are staying on the Pest side with a number of large bridges over the Danube connecting the two areas. The Chain bridge is the most popular and we made our way across past the two large lions guarding each end, like the Lions Gate in Vancouver. 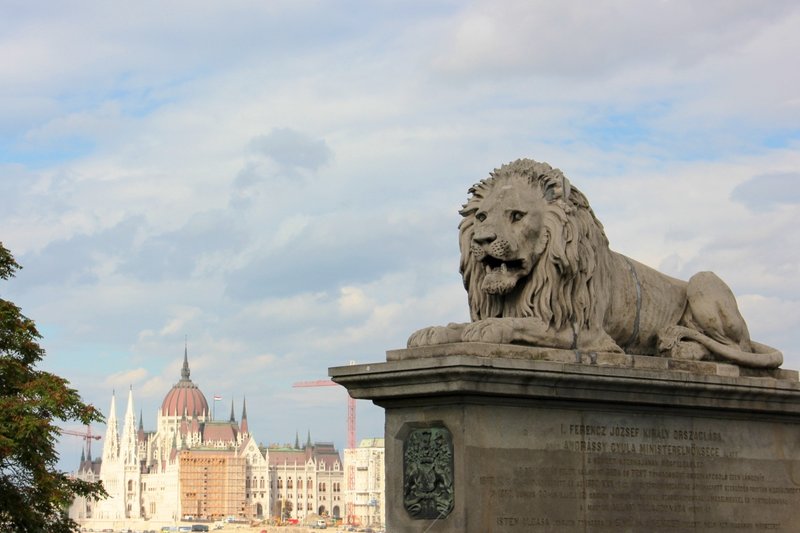 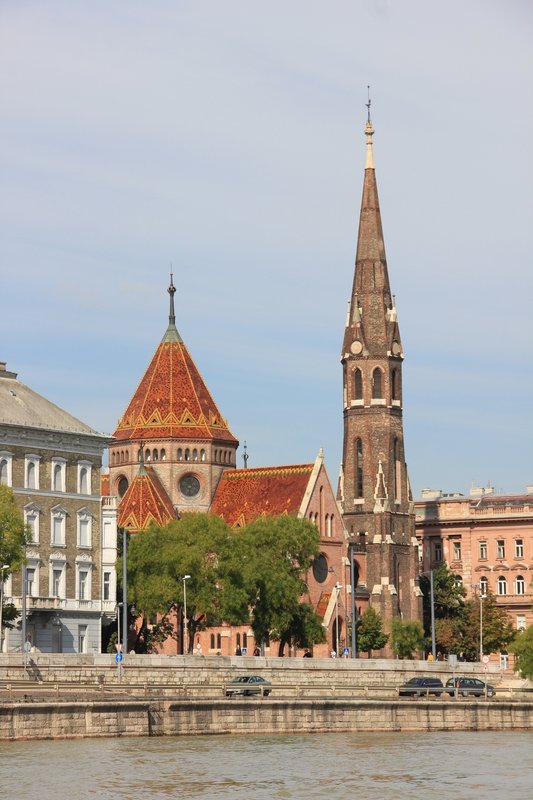 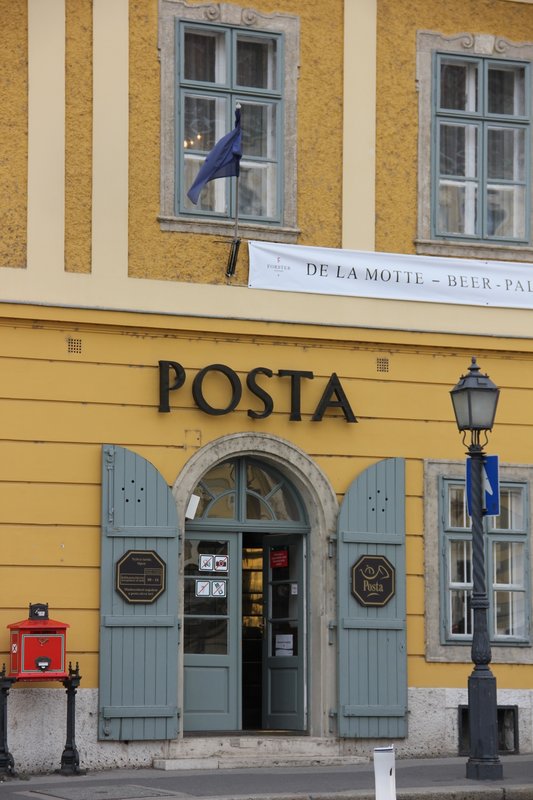 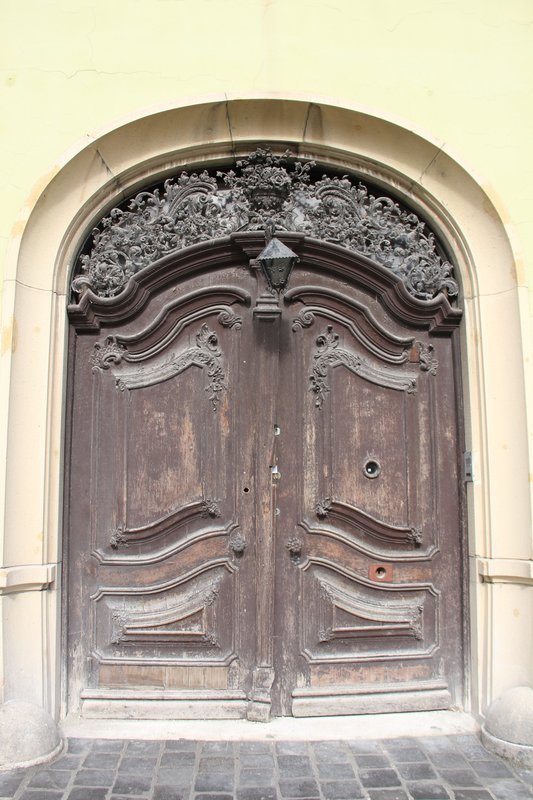 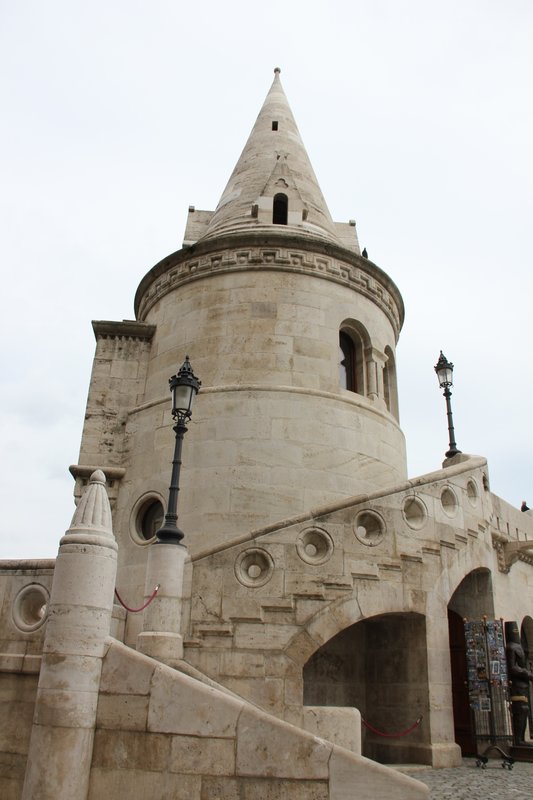 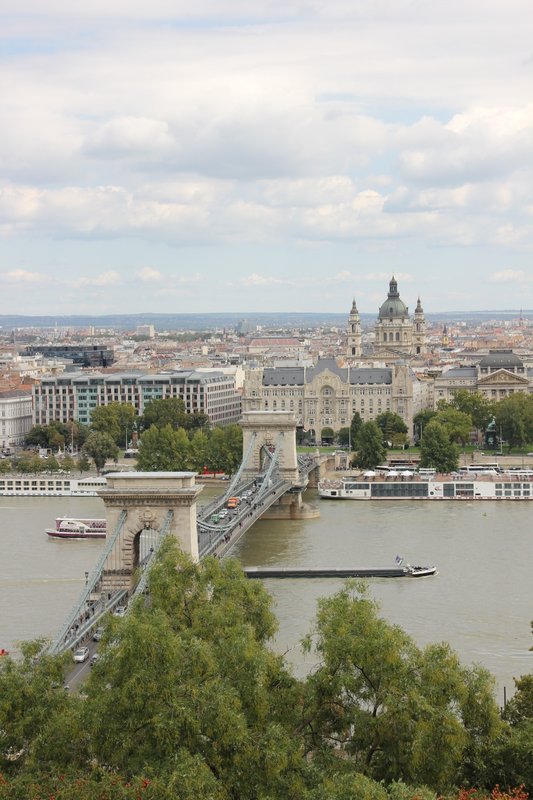 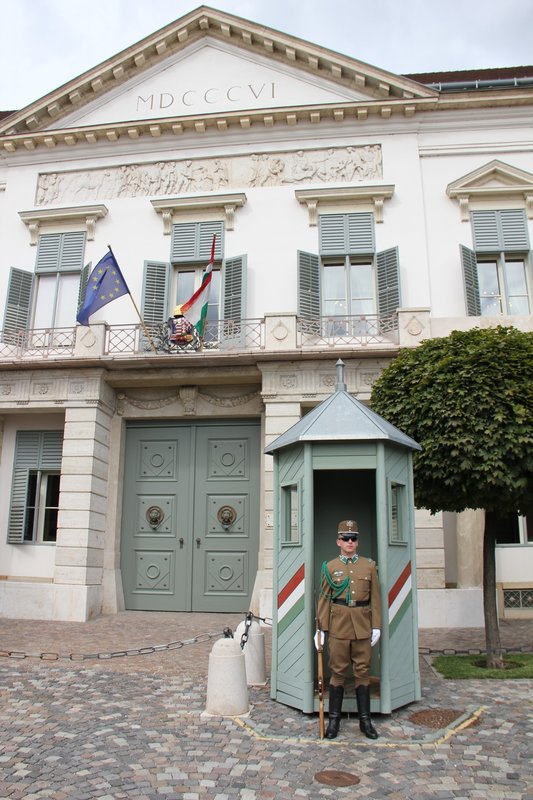 Up the 200 plus steps to the top of Castle Hill to walk the grounds of the Castle, which never had any royalty staying there. The views and architecture are beautiful.
Zoltan tells us that the Hungarian people for the most part all look stone faced and non expressive because of years of living under communist rule has gotten them into the habit of this. When you get them in a social situation however, they are full of fun and life. Very similar to Russia.

The tour was over and we were hungry so joined Zoltan in the government cafeteria. Everything was written in Hungarian and none of the employees spoke english but Zoltan explained the menu to us and we had an authentic Hungarian meal.
We walked around a bit more and then decided to take the funicular down the hill. The car going down pulls up the one going to the top. It was fun to do and offered a great view. 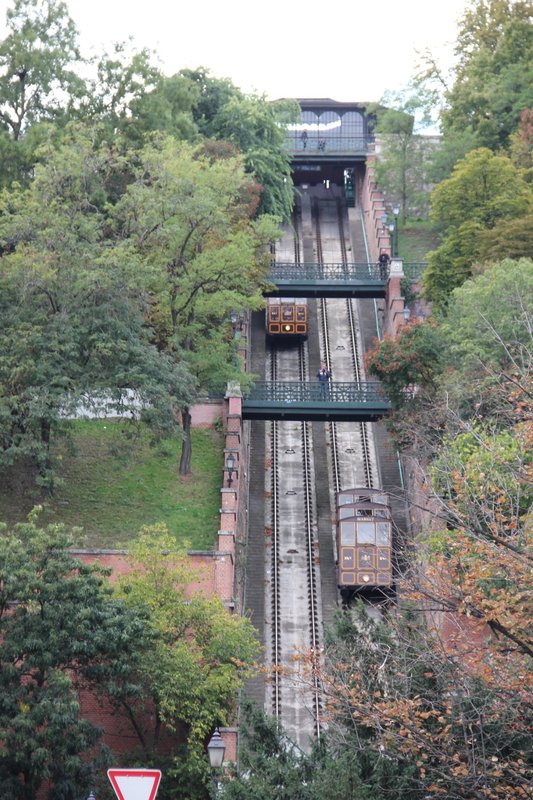 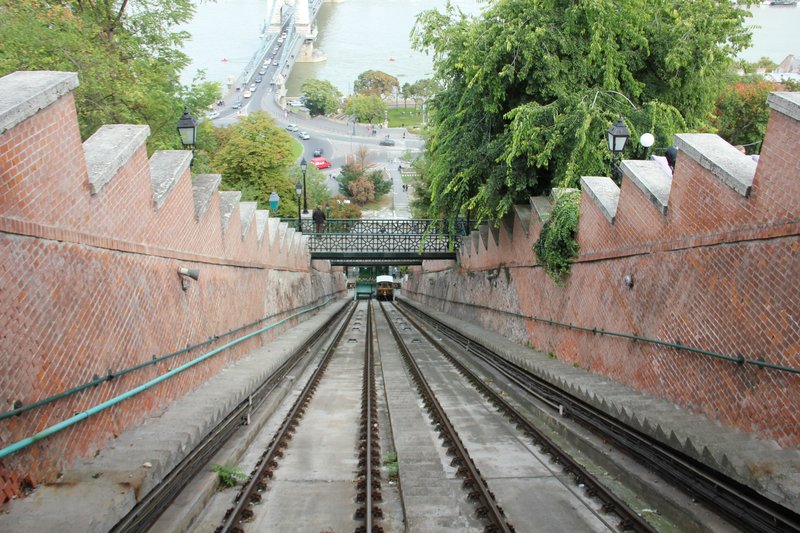 We walked across the bridge again and back to our apartment for a few hours. Our evening was spent walking on the pedestrian sidewalk/road again after dinner and looking at all the goods for sale. There was an ice bar. We didn't go in but the room was made of ice and you were given parkas to wear and then sit on ice chairs and drink beer from glasses made of ice.

Day 12. Grabbed an americano and headed to the end of the pedestrian walk to an indoor market that we had heard about. It was about four times the size of Granville island with many fruit and vegetable stands, lots of meat and sausages, pastries and what ever you like for your cooking needs. Upstairs on the second level had food stalls and stands selling beautiful leather purses, clothing, jewelry and souvenirs. Even though it is early in the morning the market is packed with tourists and locals doing their daily shopping and looking around. Doug and I each found something to eat and then wandered around but only ending up buying some fruit for our train ride the day after tomorrow.

The train station to our next destination was quite a ways from where we were so we walked to find the metro. Budapest has three train stations and I got it wrong and the one we went to was not the one we needed. We were able to buy our tickets there anyhow but glad to have bought it a day early and not shown up at the wrong station on departure day.

On the walk back we found the National Museum and there was some sort of religious gathering in many tents around the grounds. We did not understand any of it, but walked around to see many denominations represented. Doug went into the museum and later said that he really enjoyed it. The Roman exhibit was better than the ones we saw in Turkey he thought. I just walked back to our place for the afternoon.

A block from our apartment is a vegetarian restaurant which we enjoyed and then walked the pedestrian walk again to people watch and just get out. A small restaurant had a man playing a violin and another a piano so we sat on the patio and enjoyed an amazing hot chocolate. It tasted like melted chocolate. Yum. With not many patrons he came over and played some tunes for us, asking for requests. I said I wanted to hear Hungarian music so he played some wonderful fast Hungarian tunes. He was an extremely accomplished musician.

The Hungarian people are very good looking for the most part. WIth ancestors from Asia, Turkey, Germany and the Slavic countries, they have taken the best traits of each. People are again very stylish and well dressed. The shoes, oh to be able to wear some of these shoes!!!!! 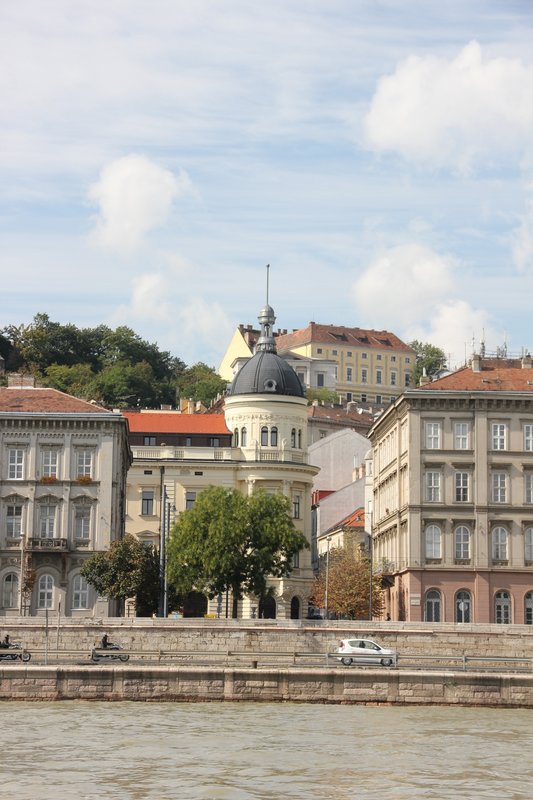 Day 13. So far Budapest has not been our favourite place. It is nice, but a huge city, with over 2 million population and we are just spoiled from Prague and Krakow being so amazing. If we had come here first it may have been a different story.
But, I wanted to give it a chance so we decided to do the 'Hop on Hop Off Bus'.
The ticket included, whether we wanted it or not, a boat tour on the Danube so we started there. It was nice to see both sides from the water and we were told that the "Elizabeth Park" at the end of the tour was a great place to get off and walk for an hour. It is an island in the middle of the river between the two sides and similar to Stanley Park in that people come here for family outings etc.

There is a jogging track around the island and as it is Sunday it is packed. The middle of the track is recycled rubber so easy on the feet for the runners. Tennis courts, swimming pools, waterslide park, rowing club, playground, gardens and even a small zoo are on the island. A nice escape from the concrete jungle of the city and seems to be well used by the locals. 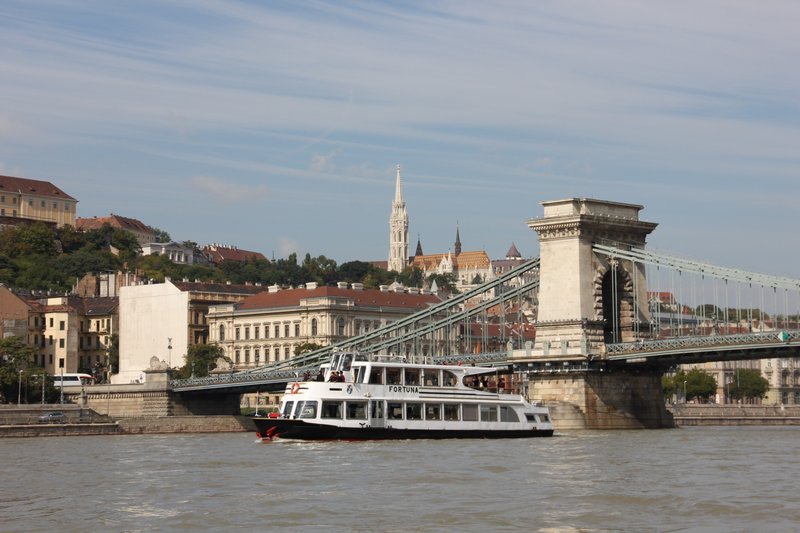 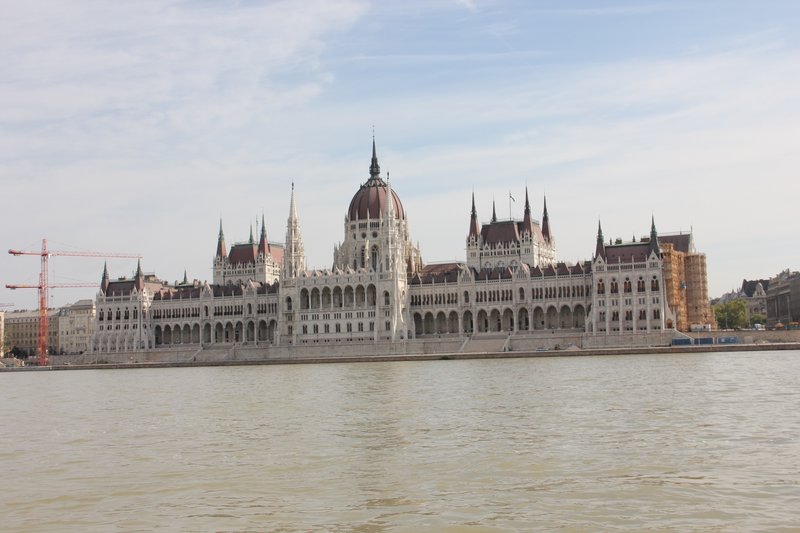 A hour spent walking we made it back to get our boat back to the starting point. We now looked for the double decker bus to start our tour of this huge city.

Budapest was under communist rule for 50 years after the war, just like Poland. Not much upkeep was done during that time and then the Hungarian Government didn't have the funds to do the work. Recently they have started to do the repairs and upgrading needed but that means the the city is in pieces. Roads closed, torn up, blocked off and dust and dirt everywhere. Perhaps that is why I didn't enjoy it as much as the other cities.
That is one reason that the bus tour was not the greatest. The stops were not marked because they had to keep changing them and then when we finally did get on the but they never had any information that was good on the head sets and waited 15 minutes at each stop.

I was fed up by stop number 6 and we got off and walked the rest of the way. Too bad because in every other city we have done this tour it has been great.
The other weird thing is that there were three companies that called their bus "Hop on hop off", they were just different colors. How does this happen?? We had the 'econo line'. Get what you pay for.....

We found a great place for lunch, one of the best yet, and then walked back to the room. We packed up and went for a Vietnamese dinner at a small place across the street from us. It was wonderful and the young man from Vietnam who owns it was very
charming and friendly. He ordered a cab to pick us up at 10:30PM for our train tonight.
We paid for four nights here but decided to leave at midnight instead of the morning to save time. We were grateful to have the room to hang out in until that time. 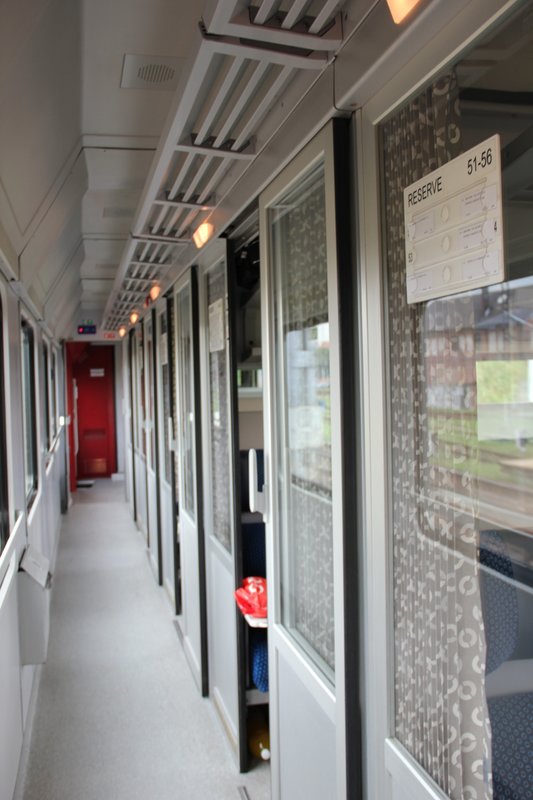 We have an overnight train and I am writing this in our lovely little cabin, nicer than the last one. Needing a change from the big cities we are heading to some small medieval villages for a while.

2:30 AM Doug wakes me to say there is someone knocking on the door. He is on the top bunk so I open it to find a young man in uniform.
"Passports."
Groggily I find them and after scrutinizing for a while he stamps and returns them to me.

3:30AM. Knocking at the door "Passports"
Didn't we just do this? Same routine. I try to get back to sleep but notice that now that we have crossed the border the train feels like it is on a washboard track. Shake rattle and roll I feel like a milkshake.

Day 14, 7:30AM. Pulling up the blinds reveals the countryside with miles and miles of corn for as far as the eye can see. Sheep, cows, gardens. We see 'peasants farmers' picking the corn by hand and loading it into large wooden wagons pulled by horses. It looks lovely and we can't wait to explore this new area.